Bender – Not the cartoon robot!

(Guitar Technical, one in an occasional series by Ross “Scoey” Colledge)

While “benders” are mainly used by country players to replicate a pedal steel sound of sliding from one note to another, David Thompson recently displayed that a bender in the hands of a skilled guitarist can really do great things in the blues (it’s a pity I don’t have a youtube video of the event to give a link … but if you see David Thompson playing somewhere, check him out). 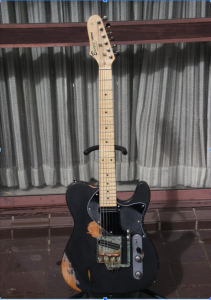 So what is a bender, what does it do, how does it work and what do they cost?  Glad you asked.  If you didn’t, and are a bass/harp/keyboard/sax player or vocalist and couldn’t give a … well …  scroll on and don’t be bored here.

Historically Gene Parsons of ‘Nashville West’ and Clarence White of ‘The Byrds’ in 1968  came up with the concept which was called the the parsons/white pull string and originally worked on the top four strings of a guitar and could raise a note’s pitch by a tone and a ½ (3 frets) on a Telecaster with  no tremolo arm.  The system worked by pulling down on the guitar neck, which put pressure on the strap button and worked the mechanism.

White, the guitarist, decided only the B string need to be raised in pitch so the system was simplified.  The system was also used by Bob Warford guitarist for Linda Ronstadt and the Everly Brothers.  The system was licensed to Fender and further simplified by Leo who authorised a prototype of the new design but it didn’t go into production.

However a certain David Evans obtained the licence and produced over 2000 units with his own modifications until 1973 when he outsourced production in conjunction with Meridian Green.  By then his customer included the Rolling Stones, The Eagles and Led Zepplin  and wait for it, Albert Lee…  Ah ha! .. the blues connection!

Green also approached Fender again and the Fender Custom Shop who produced 200 signature telecasters with the string pull.  Based on the success of these fender again renamed the device the B Bender and in 1996 production of the Nashville B bender Telecaster started.

The problem with the original system was the routing of the guitar to incorporate the mechanical system.  The Fender guitars were not cheap so kits and instructions were produced but these were not successful and in some cases resulted in the destruction of the guitar by amateur routers.  So B bender installation became a custom shop in house only installation at a  cost of US$1000 to $1400 depending on the model and who does the job.  Similar units pulled down on the neck screw or a belt buckle attachment but the theory was pretty much the same.

It wasn’t until 1982 that the Hipshot B bender which could also have an attachment to to the same thing to the G string was manufactured by Dave Borisoff and the first non-intrusive bender was produced.

So what makes the Brisbane unit unique? 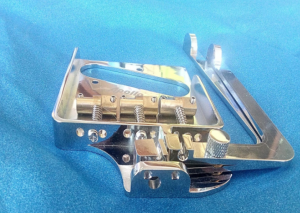 It is a local product.  Produced by Apollo Music Parts and supplied by Bunyip guitars, it works on both string through and top loader Telecasters.  The Apollo unit works on two levers which sit below the bridge and are activated with a simple finger pull.  No routing is required and the unit can  be installed by your friendly local guitar tech.  It  is a high quality long lasting unitand comes with four mix and match arms to suit your own personal playing style.  It comes complete with three brass compensated bridge saddles so setting action and intonation on your guitar is uncomplicated and can be adjusted on both G and b strings to give bends from ½ tone to a tone and a ½  on either or both strings.  Pulling the lever, plucking  the string and releasing the lever gives the blues dropping tone used so frequently.

Scoey is a Fender Trained Guitar repair technician and builder, among other engineering skills. He builds innovative guitars using propriety tonewoods, and advanced pickup and switching system under the brand name “Bunyip Guitars”