DJ Reckless Robin – Blues and the Art of Motorcycle Maintenance

Bear with me, this post is going to take you along for a ride… unfolding pun intended …

So, recently I had the good fortune to attend a motorcycle rally with, what turned out to be, 527 other kindred spirits… most adhering to the mantra of “I’d rather ride than polish”. The rally site is in a very scenic spot between Stanthorpe and Tenterfield, on the banks of a river. Honestly, you couldn’t have picked a better spot, a fitting destination from enjoying some great – and not so great – roads taking the most scenic way there. 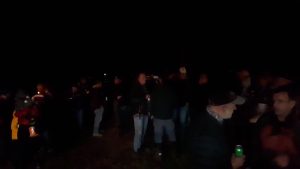 It was a return after COVID of the yearly “Ruptured Budgie” rally, organised by the Moto Guzzi Club of Queensland, and used as a fundraising vehicle for the local community. The local Lions club were there to support the club from breakfast to dinner, and in turn, the club – and the rally – supported them with raising funds, along with contributions to the local school, Rural Fire Brigade and many more. 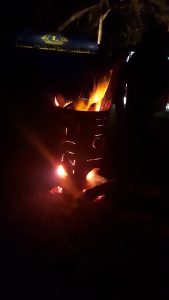 What’s a “Moto Guzzi”, you ask? A motorcycle manufacturer from Italy, the marque was celebrating it’s 100th birthday this year. “Since 1921”. High performance of sports, touring and adventure motorcycles, characterised by their V-twin engines of various sizes and power delivered to the rear wheel via shaft drive. The oldest Guzzi motorbike that attended this rally was built in 1951, and the furthest traveled was a rider from Tasmania, although Adelaide was also represented. 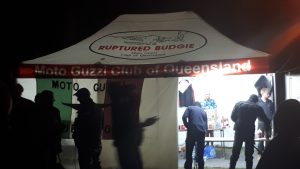 Think about that for a minute: Moto Guzzi have been around before Lonnie Johnson’s musical career took off, before Lead Belly started recording, the early days careers of Mamie Smith and Alberta Jones, Son House was 19 and Robert Johnson was only 10!

“What’s all this got to do with the Blues?” you ask? I’m getting to that… 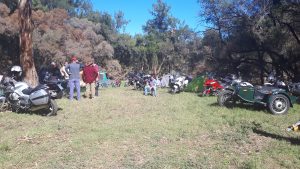 So when I, as part of a small posse, arrived as the sun was setting and we were unpacking and setting up tents, what drifted across this idyllic setting from a very modest P.A system was the sound track to the weekend: a most excellent playlist of great blues songs that any blues aficionado would instantly recognise and appreciate, Muddy Waters, al three Kings, right down to hearing Continental Robert Susz singing and blowing up a storm, through to the Bondi Cigars, and including  a 19 minute version of Jimi Hendrix playing some amazing versions of blues standards. This DJ obviously knew his blues. 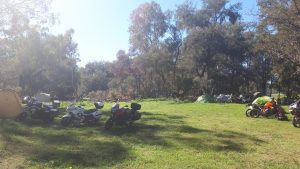 It’s worthwhile to put the situation in context. Motorcycle rallies aren’t rock festivals like Purga Creek (run by the Odins Warriors). Amplified live music would be a logistical nightmare to pull off at a rally like this. It was  deliberately out of the way with no hard infrastructure, just portaloos, a marquee for the bar with coldroom on a trailer, another the Lions Club brought in for the kitchen and food servery, some rubbish skips, and – intentionally – a long way from any major city. But that was the point: food and drink was freely available, but everything else was the responsibility of the participants. And at the end of the day, everyone was there to socialise, not be entertained. What was provided was the perfect soundtrack that lubricated this social gathering. 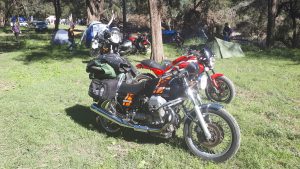 So I made the effort, once the tent and sleeping arrangements were completed, to go up to the bar to pay my respects to this DJ…

… and that’s when I met DJ Reckless Robin, who, just happens to be a BASEQ member, play harmonica, and have attended BASEQ jams!

Robin has been mainly responsible for the music at the Ruptured Budgie Rally since it started in 1994 where he started by sitting a cassette Boombox in front of the Bar tent and turning over the cassette every 45 minutes, progressing to digital files on a laptop, DJ software and PA that can take the music as far as peoples tents.

Music is provided for around 12 hours on Friday and Saturday.

Tastes have not changed too much over the years, refining the formula down to some quieter laid back background music during the day, on to some louder upbeat blues and then a mixture of the crowd pleasing oz rock favourites, AC/DC, Angels and Rose Tattoo plus some other things thrown in to keep up the interest.

DJ Reckless Robin offers: “Blues is always my fall back music at the Rally and nothing else gets people in the mood to party more than some foot tapping blues music. As I was DJing, It was great to look across the bar tent and see the young girl taking the cash, moving around to a Sonny Boy Williamson song, probably having no idea it was recorded 60 years ago. 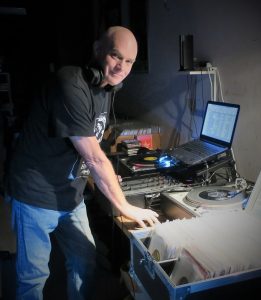 DJ Reckless Robin at the controls

“It was fantastic to get so many supportive comments for the music I was selecting from Rally goers, plus all the thumbs up, as people poked their heads round the bar tent and realised where the music was coming from. Yes, I do welcome requests, even when the person can’t remember the name of the song or the band and just hums a few bars. Yes, I do other gigs and am happy to consider any other event, although only The Budgie gets the extra special mates’ rates” 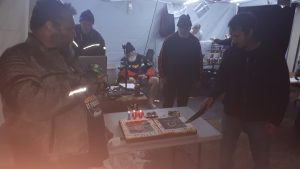