Recently I was at The Colonel’s “legendary” Blues Jam at the Morrison Hotel Woolloongabba and ran into Josh Cheyenne, who – as was mentioned earlier in the day – had just released his first CD.
So I bailed Josh up just outside the restaurant and pressed him for details …
Congrats on the release of your new CD.
Many thanks!
I’ve been more of a side-man for others, on lapsteel and slide-guitar over the years so didn’t concentrate on my own recordings, or my own lineup until recently.
So fronting a lineup is new for you?
Well, 2018 was debut gig in QLD at the Royal Mail Hotel followed a few months later with the Brisbane Blues and Rhythm Festival that Craig Claxton organised. After that I was able to fit in half a dozen regular gigs in 2018 and 2019 at places like the Brooklyn Standard.
This was followed by the International Blues Music Day (2019) in the Brisbane CBD which went down very well.
How did the actual recording come about come about?  And who was involved?
I booked in to the studio for one night to do some of my favorite old blues covers, and I figured in that time that maybe I hoped  to get 2 or 3 good songs out of it. As it turned out, we did about 14 tunes, 7 or 8 of which made it onto the album, which was well beyond what I had hoped for.
The reason it worked well is because of the guys I am lucky enough to have with me on the recording.
Mike Frost on guitar and Mark Doherty on harmonica, have done many gigs together with me and
knew the material quite well.
On bass, I have jammed with Dr Bob Harley at blues jams, have been to see some great bands he has played with, and was very fortunate that he was available at short notice for this session. He lent that consistent fundamental groove underneath the sound, which is crucial.
What did surprise me, and which ended up making all the difference, was working with Steve
Robin at The Barn Recording Studios both as recording engineer and drummer, as it was my first time experiencing that process.
There’s a level of musical comfort there. You don’t have to rush or over-prepare, it’s just nice and relaxed. 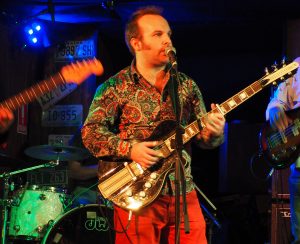 How did the recording go?
It went great, thanks for asking.
In Steve Robins engineering/producing role, I was blown away by the depth of his knowledge and skill with oldschool blues sounds and how to record them. This was easy to miss initially too, as once I had an idea and verbalised it, there was a sense of zero-friction in between the thought and the outcome.
The sound I was after seemed to just magically ‘happen’ in the studio. I am old enough to know that this only happens when you are working with very talented people and is quite rare in life! That part was all Steve, and the other part of that  equation is his drumming which is just perfect for what I wanted to achieve.
So I am really fortunate that his studio was recommended to me.
Once you add all of that together, it’s easy to see how the result is not much to do with me at all! It’s the people who I’m playing with and being recorded by.
Equal parts collaboration and chemistry?
Exactly. The main thing I concentrated on was just to ‘let go’ musically of any outcome, getting out of my own way, which is an acquired-skill I’m always trying to get better at.
This was my best way to have a fun time, and make the most of such a great opportunity. 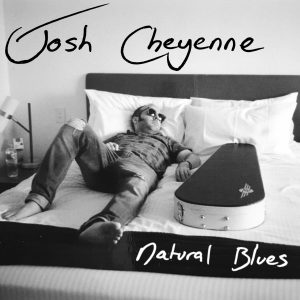 Did you have some strong ideas how to approach the actual recording?
Well, I had a strong focus in my mind from the beginning. Like many people, I’m feeling over-saturated by music that is simply produced too well in the modern era. It’s not so much of an issue in other styles of music, but for blues and Americana music in general, I really crave the textures, ‘flaws’, and grit of the older styles of recording.
I wanted to make a small contribution to balance this out a little. Some of my favorite blues recordings are the late 50’s Chess Records artists like Muddy Waters & Howlin’ Wolf, they’re so unfiltered and powerful.
Some modern recordings I like are things like RL Burnside’s ‘Burnside on Burnside’ live album, and lots of modern jump-blues stuff like from Kid Ramos, Rick Holmstrom, and others of that ilk.
I asked Steve if we could record live to one of his tape machines, with as few mics as possible, to capture all the energy and atmosphere of the room. I’ve heard this described as letting the air in the room act as the mixer, rather than channels on a desk, which I love the idea of. This approach is an extension of how ‘Ive been operating live, as I have been getting rid of anything in my signal chain which isn’t analogue for a few years now, playing straight into a reverb-tank into an amp for the last few years. It’s been refreshing.
I noticed that the simplicity helps to bring out a more creative and melodic approach, and doesn’t feed the over-analytical part of my brain. I didn’t used to believe it when I was much younger, but there is something magic that happens when you commit to using the tone and volume controls of your guitar, to control the tone and the overdrive. I can’t always get precisely what I want, but within the struggle to do so, great sounds
come out that for me I can’t get with most pedals.
And the others were comfortable with this approach?
Well, luckily for me, Mike and Mark Doherty are also big advocates for early musical technology, so everything was done with old tweed and supro type tube amp circuits and a couple of reverb tanks. 3 of the amplifiers that we used were built by Mark as well. A little Tweed Princeton, a 5E3 Deluxe and a 5C3 Deluxe, so that was a great bonus, something a bit more personal about that, and a big part of the final sound, and helps my playing feel as honest and as clear as possible.
Any “Standout” moments come to mind?
There was one I won’t forget as it was a revelation for me.
There is a song called 44 Blues (aka Forty Four) from Howlin Wolf which I have always loved.
But it has the weirdest drum beat, which I have always struggled to explain in words to drummers. The best way I could describe it is that it’s almost like a military-march beat (I may be totally wrong on that?).
To me, it felt primal with some power to it, so I love it. In the middle of our session, I was showing Steve how this one went. He was quiet a moment listening, then went to the kit, and immediately nailed the feel.
This was such a rare moment in my world, so I said over the microphone “keep that going!” and rushed to get my guitar lines happening right away. I was so worried that if we stopped, maybe i’d never get this opportunity again!
So on the album, when you hear this tune, you can hear this exact moment as everyone is playing the tune for the first time ever, together. I love that tune, and hope some of the vibrancy of that spontaneous moment comes across. 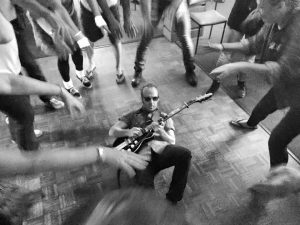