LiveStream: BBFactory Single Launch – How It Was Done 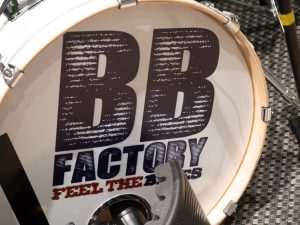 More musicians are turning to using live streams – via Facebook, Youtube … even Zoom – to reach their audience.

Reconnect with audiences, chances for musicians to play together, pushing technical boundaries, the reasons are many.

I chatted with Pedro from BBFactory on how they went about doing their recent live stream to launch their new single “Keep Yo Mama” … the recording of the live event can be found here:
https://www.youtube.com/watch?v=qdPUPoxUWP0

Congratulations, Pedro, an excellent Stream of BBFactory to release your latest single. Can I ask you a few questions on what happened behind the scenes? Lets ignore, for the moment, the very minor hicup that plagued the first couple of minutes…

Can I assume you floated the idea to the band, being comfortable with technology, and already having recording successes? Did the others have any concerns, knowing a live stream could have anything go wrong? 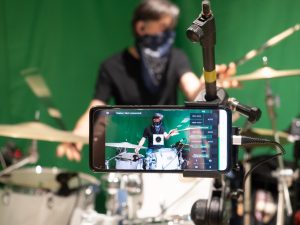 I work towards achieving the band’s agenda, but with everyone’s input. When I propose ideas, I take on the responsibility to make it happen, but again, with everyone’s input. At this time it seemed a logical move to get into live streaming. We did a couple of “live streams” early on in the pandemic but that was using footage we already had but not yet released. This gave us some confidence and a starting point.

I’m comfortable with the technology but unfortunately don’t really have access at the moment to the equipment I’d really like to use, so I work with what’s possible.
it was a very rewarding experience to engage with an audience in a direct live setting again for the first time in over 6 months. Sure, they were behind an internet connection but we felt their presence, that whole feeling of “this is live” we can’t stop if a mistake is made. It gave us that energy you also get on stage. To then have the live chat interaction with the viewers between songs made it a whole lot of fun. 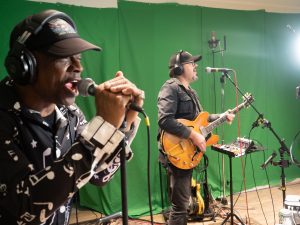 We also had a surprise visit from Dianne Hastie who brought her camera along and was coming in and out of the room during the event taking some fantastic photos, thanks Dianne! She even had a little dance!
We can’t wait to do it again, so hopefully the border bubble doesn’t “pop” because 2 of the band live just across the border!
~~~~~~~~~~~~~~~~~~~~~~~~~~~~~~~~~~~~~~~~~~~~~~~~~~~~~~~~~
Was it a nightmare to setup for the live stream, or just an extension to “business as usual” for the band?
It was done at “Clockwork Recording Studio” at Molendinar on the Gold Coast (https://www.facebook.com/goldcoastrecordingstudio/). The “live” room is about 28 square meters with high ceilings and sound treated walls.  It’s the same space we recorded our previous studio album ‘First World Blues’ so it’s very familiar for us. Upstairs is a similar space but it’s treated acoustically for mixing rather than recording.
We’ve currently got the space setup on a semi permanent basis like this, with all the settings stored and all the mic in place, the amps, keys etc so that we can simply arrive power up everything and go again.

. We took a stereo mix straight off the desk and fed it into the iPad livestream app (plus those damn pesky “camera” audio feeds by accident for the first half). Luckily we also recorded the desk from the audio in parallel to a usb drive, so I was able go back to the livestream video footage and put that audio with it and make that available as another video on youtube. Actually, a third parallel recording was done of each individual channel to a computer, so there’s the option to do a completely fresh studio mix and sync that up with the stream footage. We’re thinking of doing that with  1 or 2 of the songs performed and making it available as individual clips with fully mixed and mastered audio of the performance. 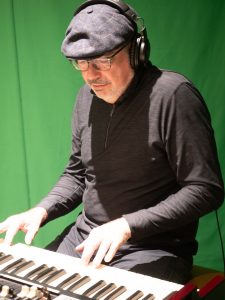 The technical responsibility for the live stream fell onto your shoulders AND you had to play guitar (with backing vocals) during the performance. Did you have assistants to help out with the audio during the broadcast, since you were needed infront of the camera (so to speak), not behind it?
Without starting from scratch each time is a huge time saver, and for me personally as the person that’s the “engineer” and also the guitarist it takes a lot of the stress of dealing with the technical stuff out of the way and hopefully lets me switch that off and make music from the heart.
BBFactory’s lead singer Harold Jackson did a great job, he came across as comfortable with the setup. What did you do about monitoring so Harold and everyone else could hear themselves?
The aforementioned QU-16 is a powerful little beast with 10 assignable outputs. So we had multiple mixes going out personal monitors for each person, with headphones plugged into each personal monitor. Each mix was customisable by each person using you guessed it.. yet another free app (Qu-You).
the QU-16 desk used for the livestream is the very same desk we took to the Doo Bop last year to record the live album ‘Let The Good Times Roll (https://www.youtube.com/watch?v=YepLDNuX3O0) 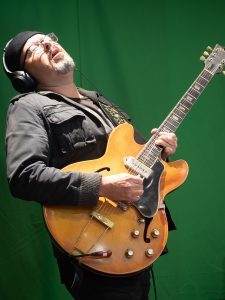 You had some fancy vision switching going on for video, which worked well (no headless torsos, no cameras sitting on vibrating speaker boxes – it has happened to others).
When I discovered there were some software solutions – in this case a free iPad app – that let you use multiple iphones as remote cameras I thought it was worth exploring.

Was it someone choosing the best camera at the right moments with the iPad app?
My youngest son Will was the nominated video switcher. He sat in another room with the iPad app and switched between the wireless iphone “cameras” in realtime as the live stream went out. Couldn’t have done it without him! 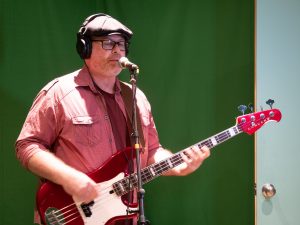 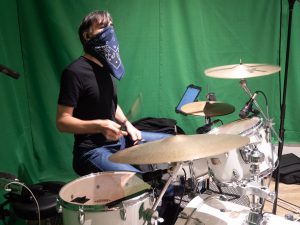 Rehearse, test, test again. If you have access to a desk that lets you record each channel separately and then playback each channel back through the desk then you are in a great starting place with the audio side of it at least. i.e. you will be able to record a rehearsal then play it back and fine tune the mix and in theory be able to do the livestream without needing a sound engineer. This is assuming the set and forget mix works across all of your songs. As for the video side of it. Hmmm. If I had the money I’d like to use a ATEM Mini Pro ISO with 4 dedicated professional cameras. The quality of results achievable with that kind of setup would be broadcast quality and offer such a simple and effective workflow. I thought about starting a fundme campaign

~~~~~~~~~~~~~~~~~~~~~~~~~~~~~~~~~~~~~~~~~~~~~~~~~~~~~
With such a great result for this live stream, and interest for more, are there any lessons learned or changes to apply for next time?
Apart from sorting out the audio/camera/sync issues, I’d try to be a little less rushed at the start next time. Jam a little, get a few viewers, stop and ask them if it’s all working ok, if not, fix it, and continue. Might even ask them for requests before we officially start, if we can make it work, as a bit of a thank you for them supporting the band.
This could be a regular event, with each new broadcast built on the release of a new original song, perhaps with a surprise new cover song interpretation and then some of existing material we do. Pretty much the same format again actually. and make sure it’s well promoted to get as many people as possible to be part of it – the more the merrier! 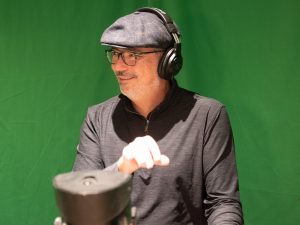 Thanks for explaining what went on and we’ll be looking forward to seeing the band live again, either online or – better still – in person.
BBFactory are