LiveStream: Blues Arcadia – How It Was Done 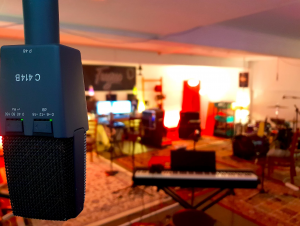 Even with using recording setups, there are many ways to tackle how to stream a band.

Here, Casper Hall, drummer for Blues Arcadia and owner of SoundOut studios explain how he and the band approached their Facebook Stream.

Congratulations, Casper, on an excellent Stream of Blues Arcadia the other week.

Can I ask you a few questions on what happened behind the scenes?

Firstly, did you float the idea of live streaming to the band, being comfortable with technology, perhaps using the success you and Jeremy had with your Vodcasts?

• So back in March we actually did our first live stream as Blues Arcadia at which time we had just had our month long ‘Two wrongs don’t make it right’ single tour cancelled. I knew that it must be possible to get some kind of live stream happening so after some trouble shooting with Jeremy we floated the idea to the band and we ended up doing one in lieu of the shows we lost that week. This time around Al asked me if we could line up another one based on the success of the first. 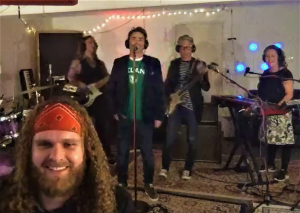 Did the others have any concerns, knowing anything could go wrong with a live stream?

• Not really other than the obvious risks, but obviously in Blues Arcadia we pride ourselves in holding a high standard and giving our best performance every time we hit the stage real or virtual, so making sure the platform we were using to reach our audience was relatively stable was quite important. I found explaining how things were going to work and what could potentially go wrong definitely helped ease concerns, and in the end we worked together to manage the risks involved as best we could. 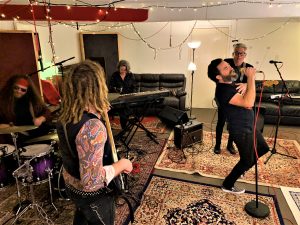 The Whole Internet as a stage (photo: Felix Lindgren)

The technical responsibility for the live stream fell onto your shoulders, yes? THEN you had to play drums during the performance. Did you have assistants to help out during the broadcast, since you were needed infront of the camera, not behind it?

• So yes, I did wear the technical responsibility mantle but unlike our first live stream I did have Felix (Lindgren, singer/songwriter/multi-instrumentalist) this time around to sit at the computer monitoring the stream, and angle the camera properly. Most of the set up I still did myself however, and I wasn’t really wearing my drumming hat until just before the stream started, after I had set everything in motion and Felix only had to press a couple of buttons to set things off. He was more there for crisis control in a way, to put out fires, moral support etc, he’s a very handy fella! As we set up there were a couple of good suggestions being tossed around by everyone though so while I was technologically responsible it did feel like a group effort.

What did you use for the video setup? I noticed Jeremy has never seemed slimmer …

• Haha, Covid has treated him well obviously.. Jokes aside, we used a single wide angle lens camera, essentially a go pro copy which we could use easily as a webcam over USB. The wide angle was great as it let us spread out over one whole half of the room. The scaling did leave something to be desired but with our limited knowledge we weren’t able to muck around with it too much. The biggest favour we did ourselves was to set up a lot of lights behind the camera pointed at us to give it the best chance to capture a decent image of the band. 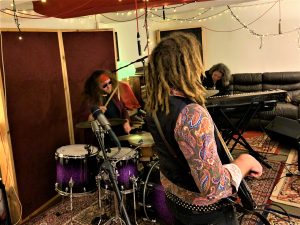 Your SoundOut studios seemed to work out well and fitted everyone in.

• Our first stream was much more challenging as we used my laptop’s built in webcam for the video side of things forcing us into a very narrow angle and some significant lighting issues. Following that, to be able to set up using half the room and not have to move much around was quite refreshing. All in all I only needed to move some lights around and reposition Al and Harvey to be infront of the camera.

Can you talk through your audio from mics/DI’s source to the outgoing stream?

So this one will be for all the tech heads reading.. My system is all digital and runs 32 channels over thunderbolt via 2x presonus quantum audio interfaces and 2x presonus DP88 eight channel mic preamps linked together via ADAT. Being afforded the capabilities of a recording studio I have more or less everything close mic’d running live into logic pro x, through a plethora of vintage outboard gear emulations from SSL channel strips to API EQ’s and then back out of the computer to our ears via headphones with a round trip latency of between 3-6 milliseconds which is typically undetectable. Logic pro then has a second master bus mix which streams out of logic pro via a virtual audio interface called ‘sunflower’ allowing me to feed the mixed, post processed audio into a piece of open source streaming software called OBS. 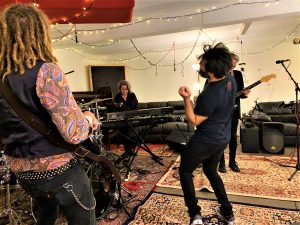 • More detailed run down of audio gear; On the drums I have sennheiser e604’s on the toms, with trusty sm57’s on snare top and bottom, an audix D6 inside the kick, some takstar pencil condensers on hats and ride, a pair of rode m5’s hanging as overheads and then a behringer B1 condenser paired with a rode NT1A as stereo room mics. Harvey’s guitar amp runs live in the room with a sennheiser e906 infront of it, Al has his trusty gold topped beta58 for lead vox, Paula runs both electric keys, piano, and an organ each in mono via an ART active Di, and Jez runs his bass direct out from the back of his Mark Bass head and then through a virtual Cab aim inside logic which I think was set to an 8×10 at the time. The rest of us other than Al also have takstar drum mics akin to shure sm56’s as talk back for any potentially great one liners. 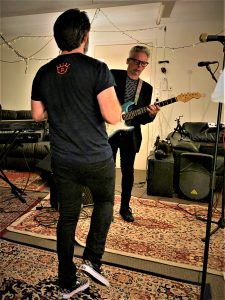 Alan and Harvey from Blues Arcadia at the live stream (photo: Felix Lindgren)

Was it a tricky setup, with acoustics and placement?

• nothing else needed to be done acoustically as we rehearse in that space weekly and have our sound down pat. … until until MacBook began overheating affecting funnily enough only the headphone system forcing us to set up fold backs instead.

What did you set up so Alan could hear himself?

• This was actually a tricky one in the end, with technical difficulties preventing us from using headphones to monitor sound like we usually do. This meant we had to set up two fold back speakers additional to the two I have up on stands (credit to Felix for having his handy) with just an hour before the stream beginning. Through the speakers I had only Alan’s vocal and Paula’s keys blasting while drums, guitar and bass were live in the room.

Were you able to check the quality of the broadcast with a trial run beforehand, or was it a quick get levels and hope for the best?

• We arrived between 1-2pm that day for a 5pm start so that we could run tests and get everything ship shape. The two tricky things were to set the constant bit rate we were streaming at low enough so that it wouldn’t freeze intermittently or the audio sound like we were underwater and to sync the audio with the video. This required a few trials where we just privately streamed to Facebook and watched back on our phones but we got it all sorted in the end! 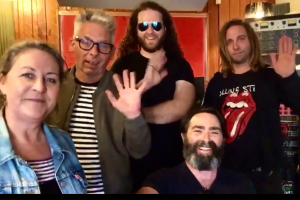 If someone was thinking of doing similar, and keeping in mind broadcast-quality TV studios are not something everyone has in their back pocket, what advice would you offer?

• Having extra hands around is incredibly helpful, pleasant room acoustics make a big difference and good decoration and lighting make the camera’s job super easy. Take the time to see if you can get an external camera working for higher quality picture as opposed to a laptop webcam and if possible use a separate machine to handle sound from the one you’re using to stream to the internet.

Any lessons learned for next time?

• Having an easy way for the whole band to see comments flying back on the stream while playing would be amazing next time around, every time we finished playing a song there was little to no perceptible feedback from the audience bar what Al could see on his phone so the energy dynamic was tricky to navigate. Other thing is to always have backups ready to go for as much as possible

Thanks for explaining what went on and congrats. Looking forward to seeing the band play live again soon, either online, or preferably in person. 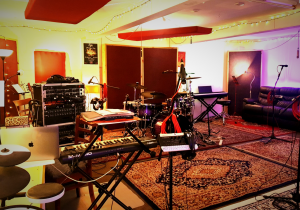