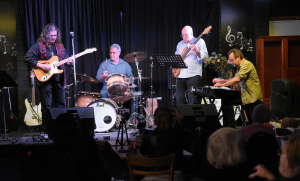 Craig Claxton and the Barbarians

“And here is someone that needs no introduction”

For the local blues scene, that fits Craig Claxton to a tee. But for those that might not know, Craig has been a professional Australian musician and talented guitarist from an early age, now with a career spanning decades.

And just like some of his older local contemporaries like the late great Ewan MacKenzie, has mastered many styles, notably rock, jazz and blues that he draws upon to carve out his own niche and personal sound.

I was keen to get a hold of this album as soon as I heard it was released, and it finally happened. Thanks, Dave Hess.

I had trepidations in on how a “solo album” by a “shit-hot guitarist” would sound, fearing wall to wall guitars, over indulged guitar lead breaks, every effect flogged to death.

I needn’t have worried. This is a songwriters and arrangers album. 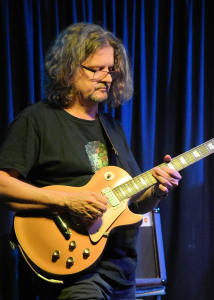 Comparison of one artist’s work against others as a reference is always fraught with bias and invites disagreement, but if I had to, I’d say some of the harmonic ideas (for example chord voicings and riffs), wouldn’t be out of place on a Steely Dan/Donald Fagen album, the blues boogie-ing prompts me to follow up with listening to the Bondi Cigars and some of the songs – especially the second and the last – to my ears – could stand alongside Richard Clapton’s more memorable songs. The Steely Dan comparison can also be made to Craig’s vocal register, which I suspect led me make think of Fagen in the first place.

I would not be surprised at all if other artists lifted some of Craig’s songs from this album as cover versions.

If only one word was used to describe Craig’s guitar playing on this album, it’s “humble”. While there is no shortage of brilliant guitar work, it’s within the context of the song, and Craig readily focuses the listener to the rest of the ensemble to allow them to shine. Tasty organ/piano, horns and backing vocals share the limelight. In addition to Craig laying down some blistering solos, there are some very cool guitar parts that are so subtle they’re barely there – headphones help hear them. Tonal guitar treatments (effects) are used very sparingly to make a statement then move on.

The album says it was recorded at Ian Haug (ex Powderfinger) Airlock Studio with production input by Michael Fix. Like Craig, Michael is another talented guitarist with a long career. I have memories of working with Michael decades ago now and how his acoustic guitar playing could easily stand alongside Tommy Emmanuel’s. I suspect the careful instrumentation and arrangements of the songs came out of meaningful discussions between Craig and Michael being on the same wavelength, with input from Brendan St Ledger who plays keys here.

The arrangements for the horns (sax and brass) and backing vocals are very well done, as are where in the songs they are inserted. The whole ensemble seem to enjoy themselves recording this. I can just imagine Kevin’s facial expressions digging his bass deeply into some of these grooves. The drumming is rock solid and fitting throughout. Listen for the drum solo that winds up track 7, a worthwhile feature.

These observations on this album have been made only by putting it on high rotation over the last couple of weeks, reading the liner notes and having some knowledge of the players involved. Separately, I reached out to Craig to elicit his thoughts, track-by-track, and provided my 2 cents as a starting point for better or worse. It really doesn’t matter if the songs are autobiographical, a vignette of observations or complete works of fiction, as long as the listener appreciates them.

I love music that happens at the intersection of blues, jazz, R&B, rock & pop.
Don’t get me wrong. I love the old classic blues as much as the next blues fan, but trying to faithfully reproduce it is not what I want to do with my music.
It’s all about trying to have an original and hopefully unique voice.

Last year’s lockdown wasn’t all bad. It gave me time to write & arrange some new material which ended up becoming my album Azure Blue. My only agenda with this recording project was to make an album that I would enjoy listening to. I figured if I liked it then other people might like it too. So far it’s been really well received.

I wrote all the tracks except ‘ Walk Away From These Blues” which I co-wrote with my wife Caroline Hammond.
I also wrote the rhythm arrangements for the songs.
The band are all stellar musicians and I love what they brought to the album.
Special mention must go to keyboardist Brendan St Ledger, not only for his incredible playing ( Hammond organ, grand piano & keys) but also for his killer brass & backing vocal arrangements and also to Michael Fix for his stellar production skills. All in all it was a very enjoyable project to be involved with. I was lucky to work with such great people and sensational musicians.

I like the listener to make their own minds up about what the songs are about. 😊👍.

Happy to talk about the recording:

We tracked the album over 2 days last November at Airlock Studios.
I then took those tracks to Michael Fix’s Parkland Studios to finish the recording.
That involved recording lead & backing vocals, the brass and some guitar solos. I wanted this album to be about the songs and not a guitar shredfest… (ed: well, then, it seems to have worked) 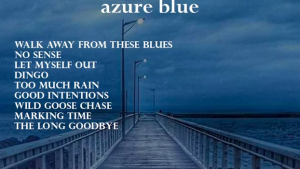 == Walk Away From These Blues

Song subject and idea
– sounds like the protagonist has been saved from the black dog by a “Good woman” coming into his life. Close enough?

Craig: I really like the ‘groove’ of this one. It’s a blues with some interesting chords and close harmonies in it. The band belted this one out of the park. Particularly the BV’s from Sarah Calderwood & Caroline Hammond and Brendan St Ledger ’s brass arrangement played beautifully by Neil Wickham & Mal Wood.

Song subject and idea
– this seems to cover similar territory to Howling Wolf’s “Killing Floor” (“I should have quit you, baby”), although with a bit more … er … respect in the sentiment and more detail

Arrangement
– The horns seems to be well featured here, especially the baritone sax, as does the organ. The piano solo, is carefully recorded to give it presence. Great (memorable) hook at the head and throughout the song at the section breaks.

Song subject and idea
– an “I’m fed up with you and I’m going” song. I can imagine female vocalists adding this song to their list of covers.

Arrangement
– a strong boogie with a solid danceable groove. What was that sound at the beginning of the song? The female BV’s are back, big brass, with a tasty organ solo complimenting a ripping lead guitar solo. What’s the story behind the slow blues fadeout at the end?

Craig: This one kicks off with an E chord played on guitar and run through a  ‘Slicer’ pedal. I don’t think they make them anymore. As you hear the pedal transforms a chord into percussive “chopped” almost sequencer like sound. It’s the only time you hear it on the record. The song itself has a great groove going on courtesy of John & Kev. The song is pretty self explanatory and slow blues at the end is about ending the argument , slamming the door & leaving the blues club going into the night whilst the music fades in the distance.

Song subject and idea
– oh dear… sounds like the protagonist has worn out their welcome. The end of a relationship or a something more “Heavy”? Most of the song titles are self-explanatory, but not this one.
Arrangement
– a slow cool groove … laid back and sultry. Big guitar and keys swells at the beginning to set the melodies and harmonic pop jazz feels, with very cool horns arrangement with riffs and swells, and sparkling piano solo. There’s a lot of subtle complexity with (what sounds like) strings vamping before the piano solo and some doubletime on drums on the outro. In fact there’s subtle textures throughout, encouraging multiple listens and a good stereo or headphones.

Craig: In this song the title ‘Dingo” refers to an animal that can’t be trusted. I’ve always been drawn to music that has ‘air’ in it.  There’s many layers going on that compliment each other and call for multiple listens, preferably on headphones. Once again a stellar brass arrangement from Brendan and a great pocket from the bass & drums.

Song subject and idea
– I initially thought this was a reaction to being surrounded by bad news, but it seems to get more specific towards a particular person.
Arrangement
– a sprightly blues rhumba well played on drums. John Postlethwate sounds like he was having a ball adding some subtle rhythm textures behind the groove. Blistering guitar solo and riffs. The backing vocals add big punctuation in the choruses.

Craig: This is a fun song to play. Blues & rhumbas go together like gin & tonic. The drummer John Postlethwaite really shines on this track as do the backing vocalists Sarah Calderwood & Caroline Hammond. I particularly enjoy the guest guitar solo from the album producer Michael Fix. It has a slight country twang to it and contrasts beautifully with my solos.

Song subject and idea
– “… but you’re heading in the wrong direction…” advice given to someone
Arrangement
– rock solid stomp, creating a huge groove. Killer riff with horns and guitars. I can hear Kevin really dig in the low D on his 5-string bass to push the song along 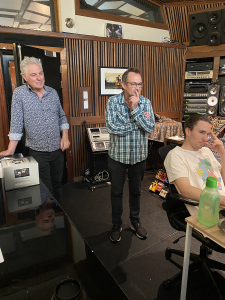 Song subject and idea
– A fun song of someone walking out of a relationship.
Arrangement
– sprightly boogie, should pack the dancefloor with killer sax and guitar solo’s, supported by organ bedding (and quick bit of soloing). Big band horns with guitar to punctuate the song.

Song subject and idea
– while “The long goodbye” is a term used about someone suffering dementia, here it sounds like it’s the slow fading of a relationship. “Cold even for July” seems to place the song somewhere other than South East Queensland.
Arrangement
– killer riff or musical theme to introduce the music and reappear throughout the song, carefully expanded upon to turn into the guitar solo. The whole song seems to be carefully assembled to be a fitting closure to the album. The reintroduction of the first verse as the last but the shift is from “could be” to “is”, which completes the story, allowing the final emotions to be conveyed by an extensive guitar solo over the fade out.

Craig: I like your thoughts on this one. It means what you want it to mean.

I like the atmosphere created in this track. There’s a few nods to some of my musical heroes including Jeff Beck & Donald Fagen in this song. It wears multiple listens well. 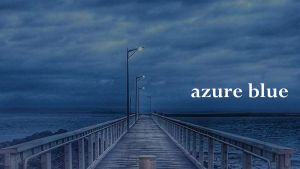 Craig Claxton and the Barbarians are the host band for the BASEQ jam, Sunday 29th August at the Royal Mail Hotel Goodna, starting (on time) at 1pm. Do make it to catch them. Free event.