‘Black and Blue’ with Chain

(I was lucky enough to have Matt Taylor talk with me about the early days of Blues in the 60s and 70s. Here, Phil Manning provides us with some additional insight, and Kylie Cowling tells us about performing the re-released ‘Black and Blue’ with Chain at Mitchell Creek 2017) 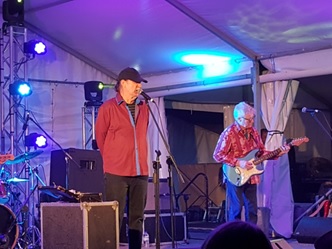 What can you tell us about the 50 years story?

Well I don’t know that anyone can truly fully remember the early days because it was so complicated, and I think Matt’s given you most of the story, so I can just add to that briefly.

Chain started in 1968 when I went across to Perth and joined The Beaten Tracks and then the Beaten Tracks moved to Melbourne and we got a new singer, which was Wendy Saddington, and she gave the band the name Chain. We worked around clubs, and eventually by 1970, Warren Morgan (keyboard player) had moved to Billy Thorpe and The Aztecs, Glyn Mason (guitar player and singer) had moved to England, and that left Barry Harvey, Barry Sullivan and myself as a trio. We were living in Brisbane and I was fronting the band and doing all the singing and guitar playing, and I sorta wanted to concentrate more on guitar, so we invited Matt Taylor to come and join us. That’s a very brief version!

Anyway we rehearsed together and on our way back to Melbourne we recorded ‘Black and Blue’ and the next thing we had a number one record! It was just outrageous, you know? And the thing that’s so beautiful about it is that the combination of having those records ‘Black and Blue’, ‘Judgement’, ‘Toward the Blues’, which became a gold album, and having the management of Michael Gudinski behind us, basically set Matt and I up for our careers. And so now we’ve done lots of lovely things. And that’s the way the music industry works. You can work your ass off all your life and never get anywhere, but if you work your ass off and you happen to have a lucky break, then that’s what can happen.

One of the most important things in the music industry though, is to treat people decently, and to build relationships. There are some people that have egos bigger than they should have and they treat people badly, and you’ll invariably find that after 5 or 10 years you don’t hear of them anymore. The people that last are generally nice people that treat people around them with respect and love.

That’s very true. Speaking of ‘Black and Blue’ how did it feel to be doing the new version of that song with Kylie Cowling (Amanda Emblem Project) sharing the vocals with Matt?

Well the fact that Kylie’s had the desire to do this song is a fairly courageous thing in itself in a way. And the fact that someone has related to that song and felt comfortable with re-doing it is a lovely compliment to us, and it’s a lovely compliment to her. So yeah, we enjoyed doing the new version of the song tonight and it seemed to go over well with the audience. 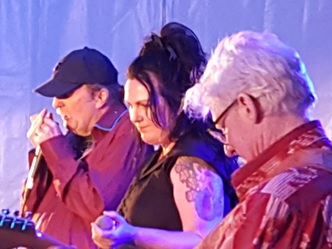 It was your riff that spawned that song wasn’t it?

Yes, when we first rehearsed with Matt joining as a singer, I said ‘I’ve got this riff!’ and played it to him. Matt said, ‘I’ve always wanted to do a work song and that riff would fit perfectly with a work song, it’s the same tempo.’ And so Matt sat down and wrote the lyrics out. At the time we were all angry, we’d been called up for Vietnam. And so it was a work song, a prison work song that was related to the Vietnam thing. It’s a bit hard to explain exactly how, but it was. And it was also just a general work song…it still relates today actually…just protesting against the idea that you’re basically in a prison, in the workforce, on the street…you have incredibly wealthy, influential people that are above the law and then you have everyone else that are slaves to the system.

They were different times back then and many songs were written as a form of protest. How do you feel younger generations interpret songs of that era today?

Well I think a lot of the young players who haven’t grown up through that 50s, 60s and 70s period miss some of the subtleties. I remember doing one of the Hendrix tribute shows, and Janey Hendrix (Jimi Hendrix’s sister) came out and introduced us all, ‘cause it’s a family business now. And after the show, my son and one of my daughters and me went into a café and this young guy came in and he said, ‘Everyone on the show was great, but you just don’t get it.’ I said, ‘What do you mean I don’t get it?’, and he said, ‘You don’t get Hendrix.’ Yet I was the only one on the show that was there in the 60s. I had heard ‘Hey Joe’ before it was released in England and I had learned it at the time and I understood the feeling, the actual thing Hendrix was doing. And the interesting thing is I watched the whole tribute show, and I thought the same thing, I thought, ‘These young guys, they actually don’t get it. They might learn it, but they don’t get it.’ So it’s one thing to interpret it, but there’s a certain thing to getting it, and that’s probably actually being there at the time.

Do you have a view on how we might preserve the integrity of the Blues and at the same time make it more relatable for modern day players and audiences so that they do get it?

There’s no easy answer. You don’t have to look at the music industry specifically; you have to look at society in general and how very different our lives are now than they were back then.

What advice might you offer to young guitarists that are trying to make it today, other than having luck on their side…any tips?

On the way up, I was absolutely dedicated, and that’s what the secret is. We’d arrive in a motel, 6 hours before the gig, so I’d play for 4 hours, shower for ½ hour, watch a DVD, watch the news, and play the gig. I just did this tour with Paco Peña (flamenco player) and the Gregoryan Brothers and Jim Pennell (jazz guitarist)…we had a day’s rehearsal and we did 6 shows. Every day we did the show we had a 2 hour rehearsal, which was a full sound check and getting things right. Everybody played after dinner, in their dressing rooms…the whole time. That’s what it is…practice and more practice. If you don’t practice your scales, your arpeggios and all that, then you don’t fall into creating our own little thing, you don’t fall into being able to relate to the other players. You’ve gotta actually put the work in, it’s as simple as that.

So what’s next for you Phil?

At the moment, we’ve got some gigs early next year with Chain and then I want to get away from my office and just write and produce things. Doing the tour with Paco Peña, the Gregoryan Brothers and Jim Pennell has really influenced me affectively. I’m getting a nylon string guitar, I haven’t had one for years, and I have all these pieces of music that I want to get together and they’re probably outside Blues, and they’re probably closer to World music things. I listen to Flamenco players, to classical players, to Irish players that play in dadgag tuning, I listen to bluegrass players, I listen to far more acoustic playing than I do electric music at the moment. I think it’s a thing of getting older. There’s certain tones, there’s things that soothe you, and they inspire new songs.

I chatted with Kylie Cowling (Amanda Emblem Project) who re-recorded the new version of ‘Black and Blue’ and performed it live with Chain at Mitchell Creek this year and she had this to say:

‘I performed with Diva Demolition at Mitchell Creek Rock and Blues Festival in 2016 and at the request of the festival promoter we performed ‘Black and Blue’.

I had remember going to see Matt Taylor at Velvets Night Club in Bendigo when I was a young girl and so just jokingly I said, ‘Perhaps we should get Matt Taylor and record it again.’ And it just so happened that Eric Erickson, a friend of mine from Adelaide knew Matt Taylor and put me in touch with him and we played the song to him and he loved it and said, ‘Yeah let’s do it.’ So I sang it with Matt Taylor and Chain at this year’s festival and we’ve released it as a single. So it all came true and it has been an amazing experience.’

Here at The Groove we have also heard on the grapevine that Matt Taylor will be releasing a brand new CD ‘The Puzzle’ in October.

Matt Taylor had this to say:

I’ve never been one to follow trends and fashions. I believe everyone can find their own creative force.

My own musical journey has been interesting and enlightening. The Blues was my musical awakening and for many years I copied the music of the Blues Masters learning techniques and songs from hard to find LP records. In the late 60s Blues developed an unearned reputation for emptying dance floors, so for 3 months I was out of work as I refused to play any other music.

I started writing songs first in a traditional Blues format then branching out in any direction I was inspired to go but always aware of keeping the essence of the Blues.

Along came Chain. At first we did many of the songs I’d written during my exile. There was no time to rehearse in Chain so we’d get a riff and blow on it. I’d make up words and melodies and bit by bit a song would emerge. My companions in Chain have always been exceptional musicians. We created a novel way of playing Blues very early and coined the term Ozblues.

We’d never seen a US Blues band till we toured with the great Muddy Waters. We thought like us they’d make it up every night. To our amazement Muddy’s band played tight arrangements and he’d pull up any musician straying from the fold. Seeing Muddy every night inspired me to play my music to the standard he played his.

To me everything must evolve so I let my creativity run free while always keeping the Blues in the background.

BB King, when interviewed about being a great Blues guitarist, would always say he was a Blues singer who happened to play a guitar. I’ve always agreed with BB on this, the song is king and all riffs and solo’s are there to complement the vocal. I now play a minority music within a minority music genre and to do anything else would be untrue to myself. Mother Blues never stands still and is the basis of all modern music styles.

Many Bluesmen have described what the essence of the Blues is to them. For me, Henry Townsend summed it up…when asked why he played the Devil’s music his reply was, ‘I play the Blues and the Blues is the truth, I don’t think the Devil cares much for the truth.’ I play Ozblues I play the truth.