Foreday Riders (University of the Blues)

Known as Sydney’s ‘university of the Blues’, the Foreday Riders celebrated 50 years as a working band in 2017. The Groove caught up with Ron King for a chat about how it all started. 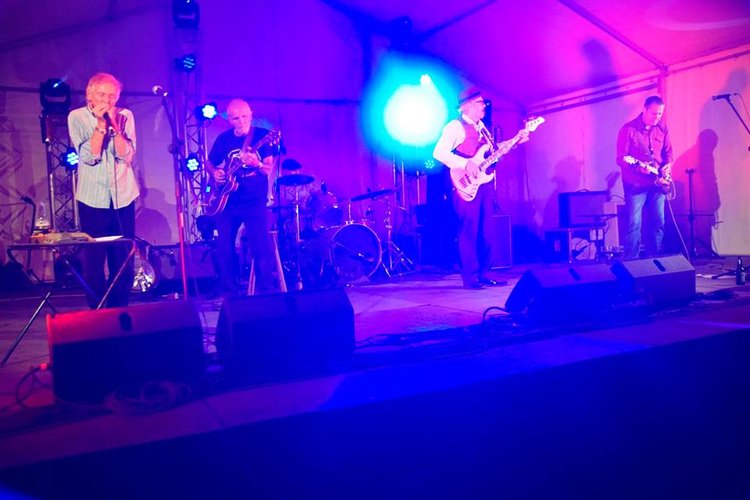 Foreday Riders (L-R): Two original members from 1967 remain: the King Brothers, Ron (harmonica, vocals) and Jeff (guitar, Dobro). Rosscoe ‘Stinger’ Clark (drums) has been a Rider since 1982, Stan ‘Sleepy’ Mobbs has been on bass with the Riders since 1990. Fronting the band is singer/ guitarist Shane Pacey whose presence they say has honed the edge on the Riders’ sound.

Congratulations on celebrating 50 years as a working band in 2017…would you tell us a little bit about how it all got started?

We were a bunch of school friends who heard the English bands of the early 60s…Rolling Stones, Manfred Man, The Animals…that pricked our ears up. They had an earthy sound that we just took to, and we thought, ‘We’re gonna have a go at that.’ When we heard who they’d listened to, we got onto Muddy Waters, Howlin’ Wolf, Jimmy Reed…classic Chicago Blues really.

Who are your harmonica influences?

So we started learning instruments in our late teens and developed together, just learning on the job sorta thing, and eventually we got to the stage where we could go out and get gigs. Our first one was in ‘67 at a little wine bar down on The Rocks in Sydney. It was a jazz joint really, but they gave Blues a go. And once we got established there we learned quickly and we were able to get jobs at other wine bars, pubs, and clubs and eventually we got to the stage where we were able to call in very good front men who would do our material, and so it was just naturally evolving.

All along we’ve done our own material but we’ve also covered what we considered were the great Blues songs…music we still get a lot of pleasure out of. It’s not commercial or mainstream…it’s more fringe music, but we were always able to keep in work.

We had a 50th Anniversary show in Sydney about a month ago (August 5th) at the Factory Theatre, a big venue in Sydney, and it was a full house, around 400 people. We had around 16 players from all the different eras in the band…people who had recorded with us, right up to the current line-up.

Will there be a 50 year album?

There are no plans to do that at the moment. We’re still recording new material…we just put out an album last year called ‘Herding Cats’ and that was 90% original. Jeff and I had a backlog of material that we’d been writing and developing and decided we’d just get it all out on one album.

How do you feel the old days compare with today?

I lived in London for about a year at the end of the 60s and 70s and got to see some of my idols, like Son House…true originators that were creating the music of the time. I think the younger players nowadays are probably a lot more technically able than we ever were and a lot of ‘em are getting university educated in jazz music and the like, but at the same time they’re obviously more removed from that Blues surge in the 60s. We were just lucky enough to be part of it, and as players we didn’t realise how lucky we had it…every pub had a band and we never had any problem working 4 or 5 nights a week…we used to knock back gigs all the time. We never did door deals, we just had a free entry and we got paid what we wanted…it wasn’t big money, but it was enough, and much better than it is today, relatively speaking. You tell some of these young guys how it used to be in the 70s and they can’t believe it. To them it sounds like a fantasy. Things tend to go in waves and in general I think you’ve gotta be patient. Sydney’s picked up a little bit. You’ve really gotta be dedicated to the Blues, you’ve gotta really want to do it ‘cause it’s not mainstream, and if you’re lucky you’ll find a publican or someone who will back it. That’s how we had good luck. It was easier for us for sure because that music was breaking back then. Now, all the pubs are owned by big corporations and modern music is very different.

How did the University of the Blues come about?

Jimmy Bee from the Cyril B Bunter Band came up with that term I think. He’s worked with us before…we’ve had so many young people go through this band…the Hippos, the Bondi Cigars, Ray Beadle…they’ve been through our ranks and then they’ve gone off doing their own individual thing, sorta like a university process…they do their apprenticeship and then they’re off doing their own thing. It’s not even intentional, it’s just the way it happened, informally like. And it works the other way too. Jeff has always said, ‘if we get anyone…say another guitarist in the band, or a singer, make sure we get someone we can learn from.’ And that’s what we do. So we’ve got Shayne Pacey with us at the moment, who we’ve known for donkey’s years. He used to get up and play with us in the 80s before he played with the Bondi Cigars. But now, there’s stuff he can teach us. So it’s a fair exchange.

Well you certainly had a great night out there with the crowd at Mitchell Creek.

Oh we had a good time, it was fun. It’s a big show here, I had no idea what to expect and we were very impressed…it’s on the map for me now, I’ve got an idea what’s it’s about. And my compliments to you and to the Blues Association of South East Qld, I can see it’s a very active and supportive Blues club…I wish there were more like you doing such good work for Blues.