Blues Brothers: Still on a Misson from God! 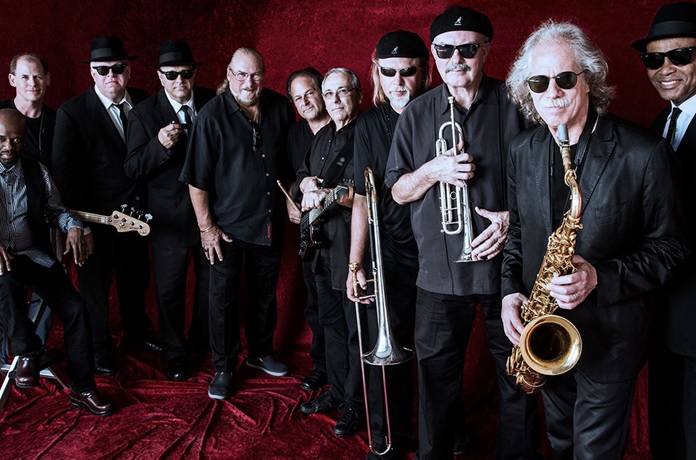 The Blues Brothers movies (1998 and 2000) need no introduction and at Byron Bluesfest in 2018 we’ll witness the amazing band that created the soundscape behind comedy actors Dan Aykroyd and John Belushi. I spoke with Rob “The Honeydripper” Paparozzi (vocals, harmonica) from his home in New Jersey, USA about the new album and the upcoming show in Australia.

The band has 16 albums including a brand new one, The Last Shade of Blue Before Black, recorded live in the studio and includes covers and original Blues tunes. What inspired the new album and would you talk a little bit about how it was recorded?

Well we did it last year and Lou Marini wanted to do it live in the studio. We brought the whole entourage into Weehawken, here in New Jersey, and we set up live to play and recorded the whole album in two days. So it was kinda different because these days there’s a lot of overdubbing and tracking going on in different places, but we didn’t wanna lose the live feel because we felt the Blues Brothers should have that vibe and so there were no overdubs, and that’s what we did.

That’s very impressive to have accomplished in two days, given there’s so many people in the band plus a lot of guest artists that you brought in.

Yeah, it could’ve been a technical nightmare when you have six horns and two guitars, and keyboards, and three singers, and guest singers, and Dr John and…you know…but it was a big studio and we had a wonderful engineer that knew how to do it and we got lucky and it came out great. So we made a good choice.

It carries through that signature Blues Brothers sound, with some new material, some standards, and it all fits together brilliantly, like all those songs were not only chosen for the same album, but were written for it – originals and covers alike. 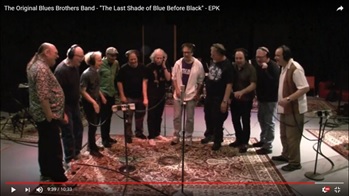 The Original Blues Brothers Band – recording “The Last Shade of Blue Before Black“ in the sudio.

It really did come together just like that. We invited Eddie Floyd, who over the past twenty years, has come out on the road with us as a special guest, and he was in the second movie, and he said, “Hey I wrote a song, ‘Don’t Forget James Brown’”, and we said “Yeah, well bring it up and we’ll do it”. And then there’s an old song called ‘On a Saturday Night’, that he and Steve Cropper wrote back in Memphis forty years ago’, and we said, “Alright, let’s resurrect that one and do it.” And so everything just kinda came together and we had a beautiful variety of some old, and some brand new songs that we wrote for the record and it just was a good combination. And I think that the band was really ready to do something. We hadn’t really recorded in a while…we’ve been out on the road a long time, and we said, “You know what, we need something fresh to show that we’re still not only out here playing for the public but we’re making some records still and we’re having fun in the studio.”

You held the CD Release Party at The Cutting Room in New York City last November. Was the new material well received?

Yes, it was. We didn’t know how to handle it because we don’t often play in New York City and when we do it sells out because we’re always playing around the world somewhere, and then we hear, “When are you guys comin’ to New York?” So we did the CD Release Party at The Cutting Room and we decided to do one big show, instead of doing two shows, and it was great. Murphy Dunne (keys) flew in from Los Angeles, Eddie Floyd (vocals) flew up from Alabama, and Steve Cropper (guitar) flew up from Nashville, and we had these wonderful special guests and the band was just in fine form because they were ready to play for all of their friends. So it really was a beautiful night in New York, right before Thanksgiving, and it was really well received. We had a wonderful time. 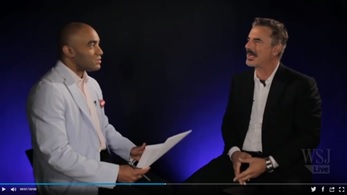 Actor Chris Noth (Law and Order, Sex and the City, The Good Wife) discusses his NYC Club, The Cutting Room.

The Cutting Room is owned by the actor Chris Noth who said he opened the bar to get people to fall in love with live music again. What was the venue like to play, and is Blues music alive and well in America in terms of venues getting behind the genre?

Well that venue, like you said, Chris did set it up for that reason, because he’s such a big music fan and of course he loves the blues and jazz, and he really gives those bands a stage. I mean, instead of making it a real Top 40 room, which we have enough of in the big towns, Chris encourages the Blues, jazz and originals bands to come in there andit becomes a wonderful showcase and people know that, “Wow, if we go to The Cutting Room, the sound is really good, and we’re gonna hear something a little different – not your typical Top 40 kinda thing, it’s gonna be a little more cutting edge.” It’s a beautiful looking room too – they have an upstairs and a downstairs, and from wherever you’re sitting you’ve got a nice view of the stage and it’s intimate. That’s what you want for the Blues – you wanna get your audience involved and in a nice, intimate room like that you can do it.

It’s always been a challenge to get the blues out to people and New York has never been a giant blues town, not like Chicago or New Orleans or Memphis. We’ve lost a lot of blues rooms over the years…we had Manny’s Car Wash on the Upper East Side and Chicago Blues club down on Fourteenth Street, Dan Lynch Blues Bar downtown…those clubs are gone. So to have a room like The Cutting Room where they respect the artists and let us come in and be ourselves, we support it and we love it.

That’s so good to hear. Hopefully more people will get on board and create venues like that for all of us. 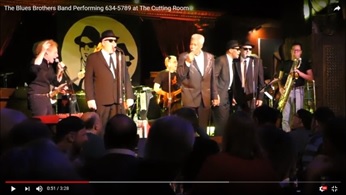 Great musicians often show up to jam with the Blues Brothers when you play. Can we expect to see some amazing collaborations at Bluesfest in 2018?

Murphy Dunne has been added to the show, and we’ve worked some special little surprises in that I probably can’t talk about yet, but you’ll see them when we come down there in March. And the band is still soundin’ kick ass and as fresh as it always has. I think it’s gonna be a big one. We’ve re-done the set since we were there a couple of years back, so we’ve got some different tunes and we’re going to be sprinklin’ in some stuff from the new record, yet it still feels like old Blues Brothers stuff. And of course we’ll do the classic chestnuts that we always do. I mean, they have to be in there ‘cause people expect it and it’s part of the show.

And even though you’ve done them a million times before, they never get old do they, and you get to enjoy that same reaction from the audience.

Yeah, you would think that, “Oh, Soul Man again, and, we gotta do Sweet Home Chicago”, but you don’t get sick of them because they’re just tunes that have that energy and have become part of what we do.

Yeah, and it’s the blues too, so I guess you get to change it up a bit…that’s just the way of the genre isn’t it, it’s improvisation, not like a Top 40 song where everybody knows the solo note for note.

Right! You can change it up, and that is the beauty of blues too, ‘cause blues is a little more interpretive… you know when you used to go see a great blues artist, like a BB King, or a Bobby Blue Bland, or any of those great artists, and even today some of the newer ones, blues is interactive , so some of those songs start to change with the venue and with the audience, but the core of it’s there and the soul of it’s there.

And you know, the Blues Brothers movie…what was it, 1979 when it broke?…it introduced so many people around the world to that music. I mean of course, the blues had the Rolling Stones, the Paul Butterfield Band and others , they tried to get this music out back in the 60s and 70s, and they did to a certain extent, but when the Blues Brothers did it come 1980, it got out to millions more than it would have ever.

And now, the parents still remember us and have showed the movies to their kids . So to see the older generations and the younger crowds out their singing these Memphis Blues and soul songs , you know that we’ve done our part, because good music lasts forever. We work off of the smiles…when we see the crowd walking out of the venue with smiles we know we did our job. And we just hope they keep passing it on to their kids and this music lives on. 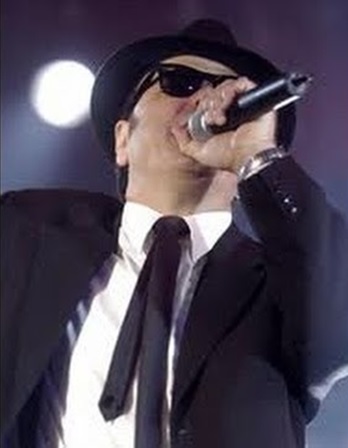 The Blues Brothers band members have grown up with and worked with Blues royalty. Who would you love to work with today, that you haven’t already worked with?

There’s probably a long list and we don’t have enough time to go into that today, but Taj Mahal is one of my favourites, and I know the band loves him too.

Well we’re really looking forward to welcoming you back to Australia. And just before I leave you…out of all the amazing one-liners from the movie, do you have a favourite?

Well I mean my favourite has always been “We’re on a mission from God”, ‘cause that really sums it up. And it really is my favourite, I use it all the time…when I’m on Facebook and I’m packing my bags, I’ll say, ‘well the mission continues’ you know? 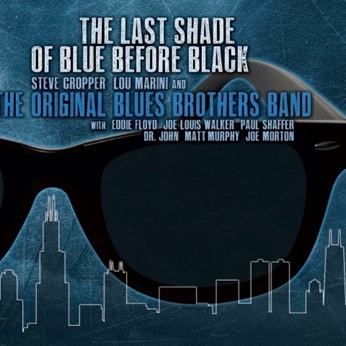 The Last Shade of Blue Before Black was produced by Lou Marini, Steve Cropper and The Original Blues Brothers Band and recorded at IWII Studios in Hoboken, NJ, by