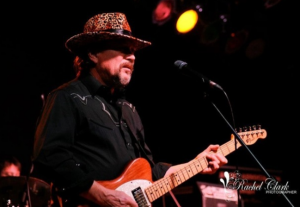 The place was the Saint James club near Spring Hill. The band was the early version of “The Bay City Union”, the singer was A. P. Johnson, other wise know as “Pigboy” Johnson, or to friends, simply “Piggy”. They were playing mainly Jimmy Reed and Sam Moore (Slim Harpo) songs, they had the groove, the feel and “Piggy” had an emotional intensity to his performances that I have not witnessed by any other Australian performer. I went home that night and as I walked out of the club I said to myself “I’m going to learn to play music like that if it kills me and it is the very last thing I do.

I already had a Japanese “Col-tone” electric (that I had swapped for a push bike) and a home made valve amp but had no idea how to play. I started off just getting that rhythm going on the “E” string then adding in notes. Some sounded good some sounded bad. The bad ones I dropped, the good ones I kept …. on and on and on and on ! … And that’s how I learned to play. I just played every hour that god sent that I wasn’t forced to do something else by my parents. Less than two years later I found myself actually playing gigs and being a close friend of the highly notorious Pigboy himself and at a tender age of sixteen I was introduced to that seedy under world of sex, drugs and booze that Piggy so energetically embraced. I was more of an observer than a doer but the stories I could tell …… Ha ha ! You’ll have to wait for the book … if I ever write it .

The Baycity Union’s drummer, Peter Miles (Spike), who went on the play with the Manfred Mann Earth Band put me on to Buddy Guy and Junior Wells but the main driver behind my musical development was lots and lots of jamming. About 1968 Brisbane crashed and everybody went to Melbourne. There were some great musicians down there but Melbourne Musos were not playing blues. I was lucky because I went down there at the invite of Lobby Lloyd and he introduced me to lots of people including Duncan McGuire and Billy Thorpe but most importantly the promoters like Michael Godinsky, Michael Browning and Michael Chug who were running most of the gigs. This was a totally awesome thing for Lobby to do and so typical of his very generous nature. After that any band I put together, I could just walk into any of those agencies and would be given gigs ! ….. Being introduced by Lobby meant instant recognition.

It was a crazy scene back then, some nights we would play three different gigs and be humping huge amplifiers up and down flights of stairs and not getting home till three am. Toking on a stogey on St Kilda beach watching a gorgeous sunrise through the pollution was a regular event. I played with Allan Britton, from the Bondi Cigars and Ian Winter who would later do stints with Daddy Cool and Richard Clapton but possibly my biggest claim to fame back then was that for a while we had Rodger Davies for a roadie, who would later go on to manage Tina Turner and Pink. Next came Sydney but you might just have wait for the next episode to hear about that.