Back In The Day … Keith “Stretch” Kerwin Remembers.

Hi Folks, this is basically the remnants of memories about the early days of the Brisbane music scene from individual personal perspectives .. and for all  intents and purposes concentrating more towards the ‘Blues’ scenario. 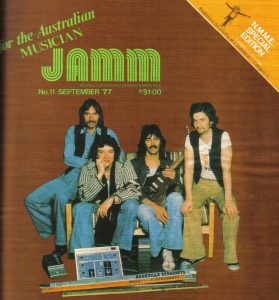 well known via my nickname ‘Stretch’.

I was born and raised in Coorparoo, Brisbane, in May, 1949 … so that makes me approaching my 72nd birthday. I’m the youngest of 6 siblings, so lets say in 1959 I was 10 years old, Elvis was at his peak, Rock and Roll was conquering the world … Cliff and the Shadows were hot on the heels.

My older brothers and sisters were in the thick of it, slicked back hair, black shirts with pink turned up collars .. bobby sox and petty coats, Beehive hairdo’s … foxtails hanging from the car aerials …and they were bringing home the music. My eldest brother John bought a ‘stereogram’ and the music came flooding in … Elvis, Bobby Darren, Baubles, bangles and beads, Apache, Peacepipe, Walk don.t run, blah blah blah!!

We moved further out to Carina around 1961 just in time for the ‘British invasion’ .. The Beatles, Kinks, The Who … The Yardbirds..

I was starting to pick out a few notes on my brothers old acoustic guitar around this time ’61-62, .. Pipeline, Peter Gunn .. as you do.

My introduction to the Blues first came about when sitting on the front steps of the house in Carina, learning some chords, picking a few licks [couldn’t bend the strings yet, too heavy] and a mate I’d met who lived up the hill in the next street would be walking home from the bus stop around the corner. His name was Jimmy Brelsford, maybe 2 yea

rs older than me and already holding down a day job.

Jimmy would see me and come strolling in the gate and sit on the steps, listen for a while and maybe say something like ‘Do you know the 7th and 9th chord yet’? Me ‘No whats that’ … so Jimmy would take over the guitar and away he would go playing blues licks and chords etc and I’d go ‘Wow’ .. so we’d talk and he’d say you gotta listen to Lightnin Hopkins, Muddy Waters, B.B.King etc … Der ok, I’ve never heard of them, so he’d drop in with some 78’s now and then. Jimmy was very influential on me as a player to look up to, he was a founding member of the Bay City Union and introduced me to such places as the St. George Club, Foco and of The Red Orb. He later found individual fame as Moose Malone and the Country Cassanovas but sadly no longer with us.

So moving onto around 1964, The Beatles hit town, I went to the concert. 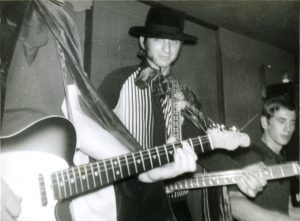 Steve Pristach bass player Thursdays Children, the hand on the Tele is Big Goose, can’t remember the drummers name, might have been Wally?

So it was suggested we take dancing lessons and a bunch of us were marched off to ‘Arthur Murrays Dance Acedemy’ in Wharf st CBD, might have been Creek st … anyhow it was after one of these Saturday morning dance lessons as I was walking along Adelaide st heading up to the Treasury Building to catch a tram home, I was about level with ANZAC square at 2 in the afternoon, when I hear music filling the air, LOUD BLUES ROCK music … it was a WTF moment … WHERE TF is that coming from … so following my ears and my nose I cross the street and trace down a flight of stairs into an arcade and theres a coffee shop The Primitif … inhabited by beatnix, long haired people, smoking and drinking, and a band is playing … so there I am resplendent in my school uniform, grey trousers and blazer with striped tie, immediately absorbed so I slip in the side sliding d 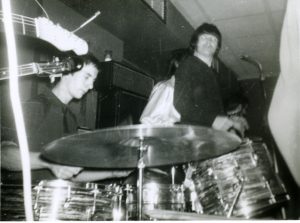 oor and grab a seat.

The band was ‘The Purple Hearts’ with Lobby Lloyd on guitar, a Fender Jaguar through a Vox Ac30 complete with fag hanging from the lip, blazing … I was sitting about 2-3 metres directly in front of him … incredible, I’d never heard anything like it … I didn’t even notice the rest of the band at first then gradually it all sunk in, next was Bob Dames on Gibson bass, he looked like a giant, Mick Hadley on vocals, Freddy on rhythm guitar and then I realised I recognised the drummer … another wtf moment, he goes to my school. R

ed Redmond was 2 years ahead of me at Villanova, we trained at football together … fark!!! He was looking at me and smiling with a kind of a nod recognition. I managed to sit through 3 or 4 songs [Smokestack Lightnin, I’m a Man, Mojo workin] before I was told to leave by a waitress ‘Your too young to be in here and besides.. the school uniform ahem!!!

A couple of days later at school Red grabbed me aside and said hey listen keep it to yourself will ya, the school doesn’t know I’m playing that stuff, so I said sure, Mums the word .. of course I told a couple of the mates. Anyhow I forgot about the dance lessons and just went to the Primitif on a Saturday arvo from then on.

Moving along a year or two I got to meet and jam with Lobby in the basement of Fords Music store where they’d have a weekend warriors set-up on Saturday afternoon. And a few years later on again in 1969 I ran into him in Melbourne when I turned professional having joined The Avengers and he remembered me from the Fords jams. I remember him giving me tip on strings at the Fords jam. You see ‘Back in the day’ there wasn’t the variety of string gauges we have in this day and age. Basically all you could get was Gibson Sonomatics 13-54’s, Lobby told me, go and buy a banjo string 008 or 009 and use it as the top E and move all the others down 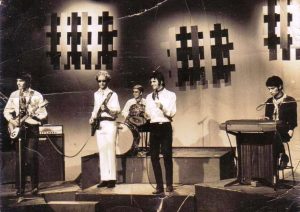 Capitol Showband on Ch 9 ‘Everybody In’ TV show

and throw away the bottom E … opened up a whole new world of string bending and blues.

I finished school at the end of 1965 and got a job with the Queensland Railways in January ’66. I remember I got my first pay in pounds, shillings and pence and then my second pay was in dollars and cents, Feb ’66.

So this was the beginning of buying ‘real’ gear, a Rickenbacker guitar, Fender Concert a 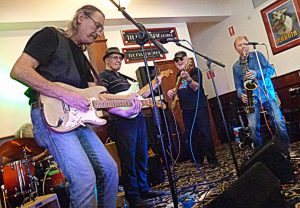 mp and others along the way. I was still using a 30w Moody amp when I first got a gig at the Red Orb. I’d gradually grown from the suburban private parties and School of Arts gigs to playing in the Brissy CBD at places like the Bowl or the Scene but the Red Orb was the place for the blues and soul. Red Redmond had broken his leg while on the road with The Purple Hearts, not good for a drummer … I believe his father set him up with the Red Orb [others may know more detail] … my friend Jimmy Brelsford told me about it as he was playing there with The Bay City Union. They’d moved to Melbourne by the time I was frequenting the Orb and ‘Thursdays Children’ were the resident band. I had a 3 piece band called ‘The Caramel Straws’ with Alan ‘Jack’ Wilson on bass and old school buddy Freddy Hudson on drums and we managed to score some regular gigs at the Orb as support to the ‘Kids’ … Jack had approached Red for a try out and he remembered me when I turned up for the audition. Thursdays Children probably leaned more towards soul RnB than blues with Paul ‘Murph’ Murphy on vocals doing a white boy Otis Redding kinda thing, Steve Pristash on bass, Heinz on 2nd guitar and significantly for me later on, Barry ‘Big Goose’ Sullivan on lead guitar and Barry ‘Little Goose’ Harvey on drums, [BG and LG] both later to find infamy as bass and drums for ‘CHAIN’ along with Matt Taylor and Phil Manning. Ten years later in 1977 I got to work with ‘Big Goose’ in a band called ‘Sanctuary’, a remnant of what was the Renee Geyer band who BG had joined and recorded with after Chain. [So heres a plug .. recently a ‘live’ tape has been unearthed of Sanctuary playing Barry Sullivan and Mal Logans [keybds] original jazz/fusion tunes along with some of mine, to be released as part of a series of front of house desk tapes in support of out of work road crews struggling in this pandemic]

The Red Orb was simply a basement opposite Centennial Park heading into the Valley. It would’ve been bulging at the seams with 200 punters, a concrete bunker really, no alcohol, Q’ld was still 21 drinking age in the late 60’s. There was an outback area with a hand soccer game which everyone had a crack at and the band played on a small stage just inside the back door, one of those ‘cellar full of noise’ type thingys. Every now and then we’d get to see and hear some ‘big names’ from down south like ‘The Groove’ or ‘The Questions’, I remember seeing ‘The Twilights’ play there but mostly it was locals with an emphasis on blues and soul music. I continued to play at the Orb when I joined ‘The Capitol Showband’ with Warren Wilesmith [vocals], Julian Young [keys] Ian Profke [drums] Robert Stevenson [bass] then later ‘Jack’ Wilson on bass … we played Booker T and the MG’s, Sam and Dave, Wilson Pickett type soul music

Foco club was another gig that was dominantly blues orientated but it was only on a Sunday night, I remember seeing Max Merrit and the Meteors and the Colored Balls there…. Great stuff.

Ok folks thus ends episode one, maybe it jogs some memories in others and they’ll get cracking on telling us some of their stories.

Next episode perhaps we’ll move into the ’70’s and the resident gigs at the TOP OF THE STATE and Lennons, Chequers, Whiskey, Adam and Eves … Lucky’s Pizza in the Valley, the after gig meeting place …