Simon Worlo has been a regular down The Colonel [1] jams for many years, originally starting on bass before moving to singing and playing guitar. It comes to no surprise for Simon to have a strong affinity to the early electric blues era from the late 1940s and early 1950s, which he delivers as “Simon Worlo & The Colonel”, or with Trev Gollagher as “The King Tones”.

Trev, Simon and The Colonel

“Muddy Waters first caught my ear. Through research and listening I then discovered Jimmy Rogers and Little Walter who were all part of Muddy’s original band in Chicago. Jimmy Rogers has become one of my favorite guitarists and has released some classic tunes in his own right such as That’s Alright, Leudella, Goin’ Away Baby, My Little Machine among others.
“I can’t get enough of the Little Walter catalog. He did not put out a bad track. Walters band was also first class and I have learned a lot from listening to the playing of his guitarists Robert Lockwood Jr and Louis Myers. Jimmy Reed’s music from the early 1950s has also been a source of inspiration on how good a shuffle can be.  Eddie Taylors guitar playing on the Reed tracks is also a favorite, especially his inventive turnaround patterns he came up with. 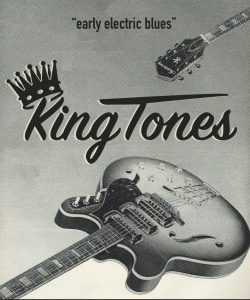 “Digging deeper I have discovered that the early electric Chicago blues originated from the acoustic country blues. I have learned a lot of songs from this genre ranging from Lightnin Hopkins to John Lee Hooker and Mance Lipscomb which has made me a better guitar picker.”
Simon explains his attraction to the overall sound of the band ensemble for these blues artists.
“With these songs the band seems completely focused on working as a team contributing to the overall sound rather than on overpowering solos. The ensemble sound is in contrast to heavy string bending guitar styles that developed around the mid-1950s and beyond.”
It seems Simon’s bass playing beginnings is not lost on him.
“The main driver about these particular songs is the groove of the track and overall sound of the band. I have done alot of research about the players from this time and the equipment they used to a point where it has become an obsession. This is one of the reasons that The Colonel (Mark Doherty) and I aligned because he thinks the same way and he is a wealth of blues knowledge (as we all know). Playing with Trevor Gollagher (drums) has also been a revelation due to his deep appreciation of the shuffle and experience playing tunes from the Chicago blues era.” 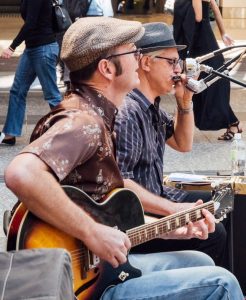 An interesting point about the development of the technology at the time of these blues artists is something Simon has reflected on.
“The Colonel also makes his own amps and has vintage microphones etc from the era which I find very cool. At this time the guitar guys and the harp guys were using the same amps. My number 1 guitar is a 1959 harmony arch top from the era and I use flat wound strings to assist me get the vintage tones I am after.
“I am still astounded at the simplicity of what these players used in the 1950s compared to what is available today. It also highlights how you make the most of what guitars and amps you do have and also how you can use tone / volume knobs on the guitar, together with finger picking (or not) to get the more traditional sounds. Mike Frost at the Colonels jam has been a fountain of knowledge in this regard as to the range of sounds that he can acquire with 1 guitar, 1 amp setting and no effects. Having the ensemble play at low volume is also important to me. If it gets too loud I think the music loses its impact and “magic”.
“So in attempting to answer your question…. yes I am trying to pay homage to my heroes that I love so much and putting my own arrangement / spin on it. It is also about playing the music and sharing the experience with like minded musicians like The Colonel and Trev. Sharing the experience with “like minded musicians” appears to be why I have found myself in the brisbane blues scene as many of the people I have jammed with, I have ended up in bands with, or have become friends and we support each other in our ‘community'”.
[1] Mark Doherty, life member of BASEQ for his achievements in supporting Blues in Queensland generally, including hosting “Nothing But The Blues” radio program on 4zzz for over 25 years, and supporting BASEQ from the beginning.
By Barry B|2021-07-23T12:16:08+10:00July 23rd, 2021|(default), News, Reviews and Events, The Groove|