SAVE OUR GIG …really? A Note On Gig Promotion 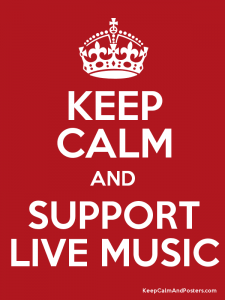 “Support live music”, “Come out and support my band”, “Support venues that support musicians” “Keeping Mu- sic Live”. These phrases can be seen regularly on pro- motional material for gigs and shows, especially on so- cial media sites.

How effective are they? Are they in fact counter-productive? Should promotion of live music be cast in a more positive light? Is live music dead or dying? Does it need to be supported? These are all vexing questions with which music lovers should be concerned.

To begin the discussion, let’s talk about a different product. Let’s talk about a restaurant. If you were driving past a restaurant and saw it being promoted with a sign saying “Please come and support our restaurant. We are struggling and really need cus- tomers so we can stay open”. What would that say about the business? To me, it says nothing positive at all. It probably makes you suspicious. Why is it going broke? What is wrong with it? That would be a logical question. The implications of such an ad- vertisement is that the restaurant is not very good and can’t attract sufficient custom to stay open. If it was any good, it would have customers.

If, however, you drove past a restaurant and saw many tables with many people eating, drinking and being merry, I suggest that you would be far more likely to take note and say “Wow, look at all the people eating there. Must be a good restaurant. We will have to go there and try it.”
When fighting for the discretionary spending of con- sumers should musicians expect “support” or charity? No way. Music is part of the entertainment business. The role of music is to entertain people. Involve people in some way to distract them, even if only momentarily, from their normal daily life and cause some sort of emotional reaction to what they are hearing.
My contention is that promotion of musical perform- ances is no different to promotion of any other business. Phrases such as “support our business” or “keeping our business alive” have absolutely no place in that promotion.

Instead, they should be replaced with positive phrases that will appeal to customers such as
“Come out to this show and have a great night out in- volving much entertainment and fun”. “Listen to my music, you will really like it and it will make you feel better”. Or phrases that convey those messages.

With that in mind I think those promoting live shows need to be very careful about using the kind of phrases listed above. Those phrases bring with them so many negative connotations that blues is an inferior product that is unable to stand by itself without the support of charitable organisations and people.

Blues in south east Queensland is thriving. On any given week- end there are many and varied blues acts playing in many and varied establishments. I am sure we will look back on these years as good years. I don’t understand why people are so negative about the scene. On any given weekend (and a fair few week nights as well!) we have some of the best blues artists in the country playing, a couple of good blues jams each week, new venues opening. It is all happening!! It really feels like there is great momentum built up in the blues scene around here. People in other parts of Australia, other major cities, look enviously from afar and say “Why don’t we have a scene like that??” And that is even without mentioning the biggest blues festival in the country, Blues on Broadbeach, that has been going since 2002.