Back In The Day – Fords Music Store – Mal Stevens Remembers

BACK IN THE DAY… Intro from MICK POWER 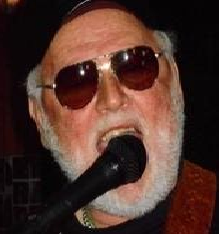 This month we start a two series edition on the history of one of Brisbane’s go to music stores “FORDS MUSIC” Woolloongabba. We discover the main personnel behind this iconic institution and the impact it made on so many upcoming musicians of the day.

As an introduction, we hear from the main man behind Fords Music Mal Stevens and, while reading his account of the day, you can reflect on some of those early

brands of Guitars and Amplifiers that now are just a memory. 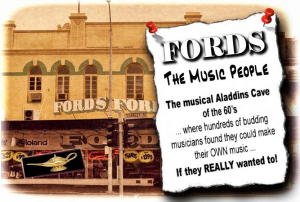 Next month in series 2, we get into the unusual events that occurred behind the scenes from the other two icons of the day, Les Crichton and Tony Decaria.

In February ’63 I joined Fords and was confronted with the task of cleaning guitar cases, tuning, and adjusting a menagerie many used Guitars consisting of mostly Hoyer acoustic/electrics, Eko Electrics, a number of Maton Fyrbirds, Tiescos, Jason, ibanez and lots of other nondescript odd shaped guitars. There was a bit to do as a little band called the Beatles had stirred things up a bit and it looked like there might be a few more sales on the way. Turns out I was right. 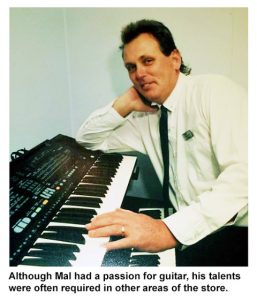 Not long after I started I sold a Broadway ‘Cello’ guitar to the Bee Gees and later sold Jimmy Brelsford a Jason 4 pickup electric guitar and 17 watt purple sided Moody Amp. Sid, his Dad had won a casket prize and would only buy it if I gave Jimmy some lessons, which of course I did. The first number, taught note for note to a very eager student, was a current Shadows instrumental called Apache. As we know Jimmy went onto much greater things. 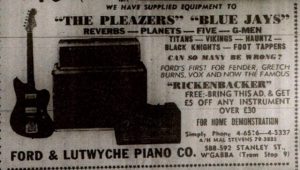 One of my early sales was a beautiful sunburst Fender Jazzmaster to a very tall, surfy blonde young man called Peter Peterson, who I later hired to work on Saturday morning as things were really starting to get busy. The (affordable) amplifiers available at that time were Golden Tone (60 watt with 4×12 speakers) and higher up the price bracket Fender Brown Concert amps. A little later Mal Clarke from the Blue Jays bought a ‘newly released’ white Fender Bandmaster and I came to the conclusion, (and I’m sure to Mr. Ford’s relief), that this was going to be a great business. 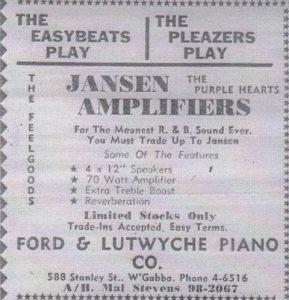 One day in ‘64 a young bloke by the name of Barry Lyde who worked at Moorvale Music ambled in and became a constant lunchtime jam partner. He was very good guitarist even then, but having just come from U.K. my party pieces impressed him too.

We also came to the understanding that he had something I wanted, Vox amps and I had Fender Jaguars. We jammed frequently … over fish and chips lunches and formed a lifelong friendship.

As the business grew it became apparent that I needed some assistance to handle the increased activity. Sales both in new and reconditioned pianos, plus the huge response to our Yamaha organ range demanded more of my time so I started a short list of potential candidates to help in the musical instrument side. Jim Brelsford was on my short list but I managed to talk a young apprentice electrician into the retail industry and Les Crichton joined Fords. Later I successfully included Tony Decaria to complete the team that made Fords the ‘go to’ destination of most local, national, and some international musos looking for great service and a great deal. 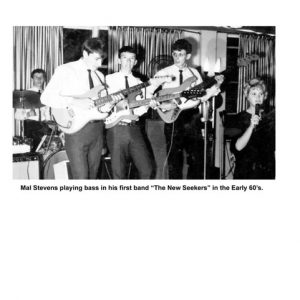 Les (St.James Infirmary) Tony (The Satisfied Minds) and I ( The Brisbane Seekers) were all in bands, but I was really only ever into product promotion, including new products like Marshall Amps,  Vox Wah Wahs, compression circuit inclusions in amps, customising Fender Strats, Overeem Amps, and later, huge Vase rigs. L series Strats and all 60s Fenders were commonplace to us. I even imported one of the first sitars into the country.

As amplifiers became bigger, and very, very much louder, it was obvious that we needed somewhere to demonstrate them without blowing piano teachers and potential church organ buyers out the front door. And the only potential ‘somewhere’ we had was a basement jammed full of old piano actions and other parts that had accumulated over the years. After a week, Les, ably assisted by our constant ‘visitor’ Patrick Clifford, had cleared the space that was to become the birthplace of those legendary Saturday morning jams and many musos and bands that now form part of a real happening scene in Brisbane and in some cases Australian Rock history. 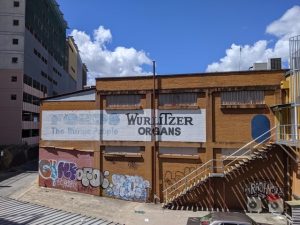 The players that took part in our jams were wide and varied, and during the week we were able to help guys select their next gear. If you were a guitarist we would cart a bass and drums downstairs into the basement for a workout etc. The other thing we had was a register of Musos and we advertised for musos to form bands subsequently an awful lot of qld bands were created after just maybe a 20 minute 12 bar jam which would give the players ideas …let’s start a band !!

I think It’s important to note that Fords was a hive of activity on Saturday mornings way before the basement was opened. Boasting an eclectic mix of customers ranging from music teachers looking for a bargain priced refurbished piano for a few hundred dollars, to a scruffy potential superstar wanting to try out a thousand dollar amp. Now, I know what the most economical decision should be, but if Mr. Ford was the person showing that piano to the teacher – we waited. So it became quite a circus, especially when you consider that closing time in those days was 12.30. And we were CLOSED on Sunday.

Add the increasing popularity of the new Yamaha home organs it got “quite busy” indeed. It was not unusual to see Mal furiously tuning up a newly bought nylon stringed guitar (by ear, no digital tuners yet) as I espoused the virtues of whatever I was selling at the time. And that was everything.

Meanwhile in a small “demonstration room,” built as far away from the piano showroom as possible, new Fender, Gretsch, Rickenbacker guitars were being played to potential buyers through amplifiers that could only be played at full volume in short bursts.  We certainly needed that cellar.

Postscript by Barry B:

I had heard that, in the basement under the Fords showroom is where The Who rehearsed before their Sat. 20 Jan. 1968 – Brisbane – Festival Hall Show (the Harry M Miller production which included the Small Faces and Paul Jones, ex Manfred Mann). More info on that tour: MILESAGO – Tours by Overseas Artists 1964-75 – The Who/Small Faces/Paul Jones

The building on Stanley Street, ‘Gabba, still stands. In the 1990’s it was refitted as a venue called “Van Gogh’s Earlobe”, and later, under different management became “The Capitol”, where bands like Directions In Groove (DIG) packed the place out at 600 patrons. Towards the end of the 1990’s it became a strip joint, and now it is a medical center, related to the Mater hospital across the road.