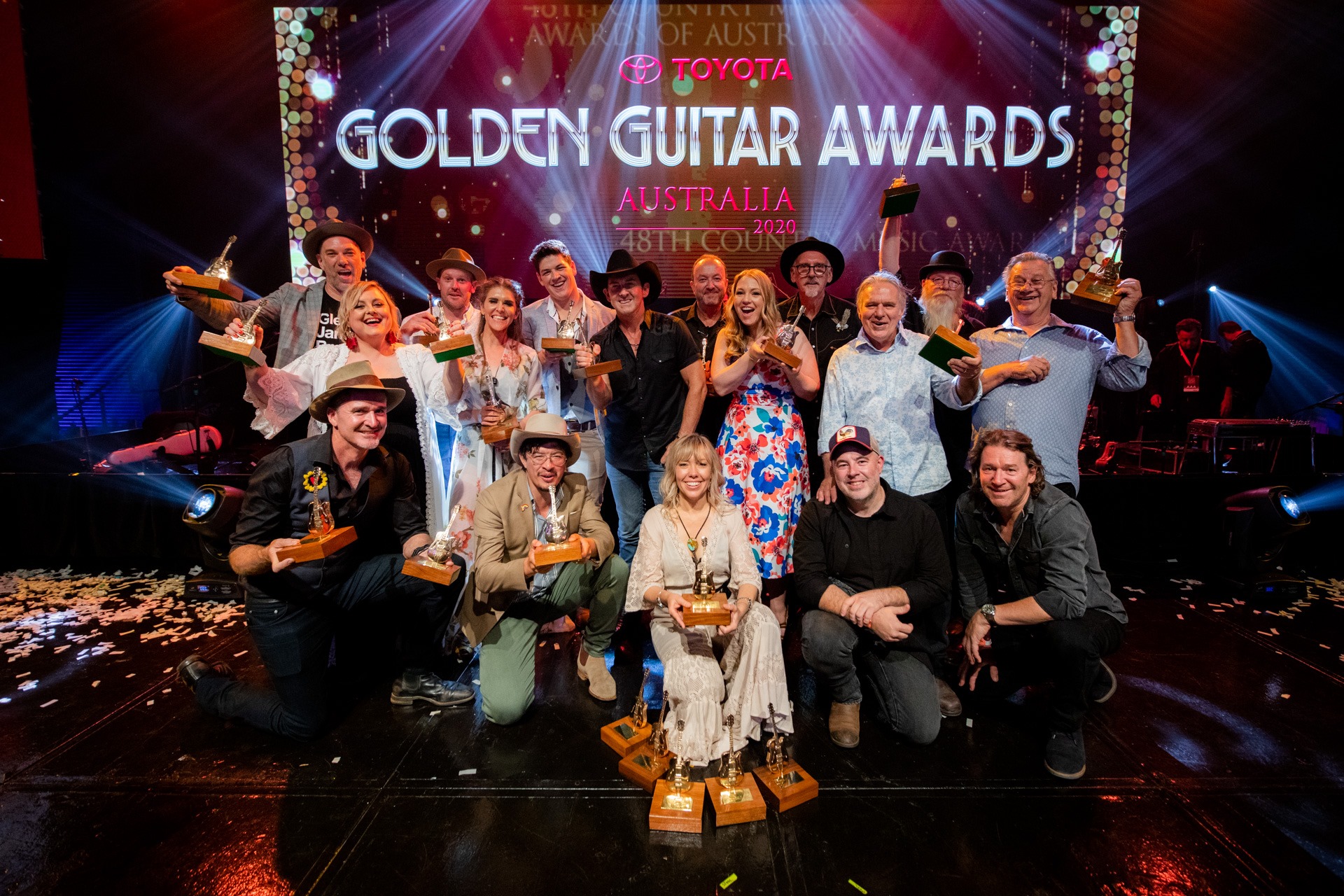 Back in 1997 Etta James recorded a country album, “Love’s Been Rough on Me,” saying, “The Blues and Country are first cousins!” Both genres could be found in the Southern United States in the 19th century, sharing the historical period and some similarities in musical and lyrical characteristics. Both are forms of folk music influenced by earlier styles brought from overseas … Blues growing from the African slave field hollers and chants, and the Irish and Scottish balladeers borrowing the guitar and adding banjo and fiddle to create Country. So, when given the opportunity to visit the Tamworth Country Music Festival in January, I was curious to find out more, and to immerse myself in the culture and the music.

A few things to note are that Tamworth Country Music Festival is the second biggest Country Music Festival in the world (outside Nashville) and has many times been counted in the top ten music festivals internationally. Held annually for 10 Days in mid-January, it is a celebration of the Country Music culture and heritage, with a massive number of visitors and accommodation booked out 12 months in advance each year and it attracts plenty of community and commercial media coverage. That’s pretty big.

During the music festival, Peel Street (the main shopping street) is closed to traffic so that people can wander freely throughout stalls set up in the middle of the road, and stop to listen to buskers at almost every shop front, on their way to over 100 live music venues to enjoy listening to booked artist performances. Some events are ticketed, and some are free. Buskers are required to register with the local council and have the opportunity to enter a competition and be judged to find the festival’s best busker. 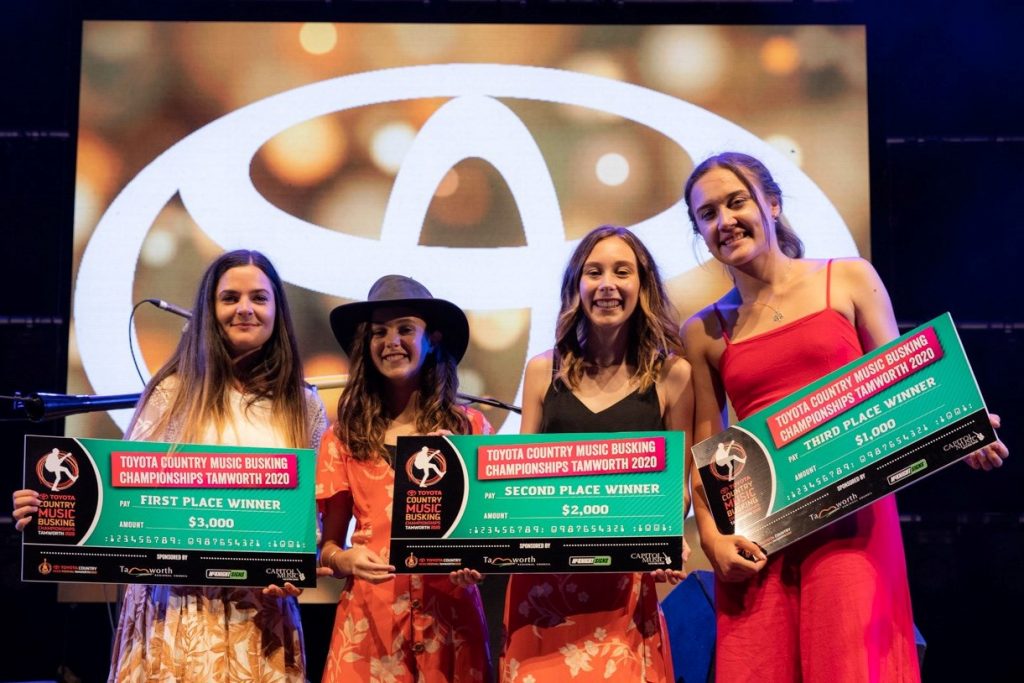 By and large, Tamworth is Australia’s Nashville. It may be a smaller pool compared with America, but that pool runs deep with talent. And just as various Blues styles have emerged, so too Country Music offers various flavours including Classic Country, Bluegrass, Country Blues, Country Rock, Folk, Urban Country, Alternative Country, Rockabilly, Western Swing, Country Rock’n’Roll, Yodelling, and World Music. And all of these could be found in Tamworth. I also ran into many Blues musicians I knew there, both performing and visiting. We all blended into one big happy family with our Country cousins. In fact, what I noticed most about this town was how welcoming and friendly it is. Everyone was supportive of each other and of the music culture. I’ll definitely be heading back again.

And if you were at Tamworth, you have the opportunity to win a prize pack including 2 x GOLD tickets to the 2021 Toyota GoldenGuitars and an annual subscription to Country Music Capital News. Just send feedback on your festival experience by taking the survey at https://bit.ly/30WWZ8S.

While I was having the customary photo taken in front of the Golden Guitar, I chatted to Barry Harley, Festival Director and Country Music Manager at Tamworth Regional Council. 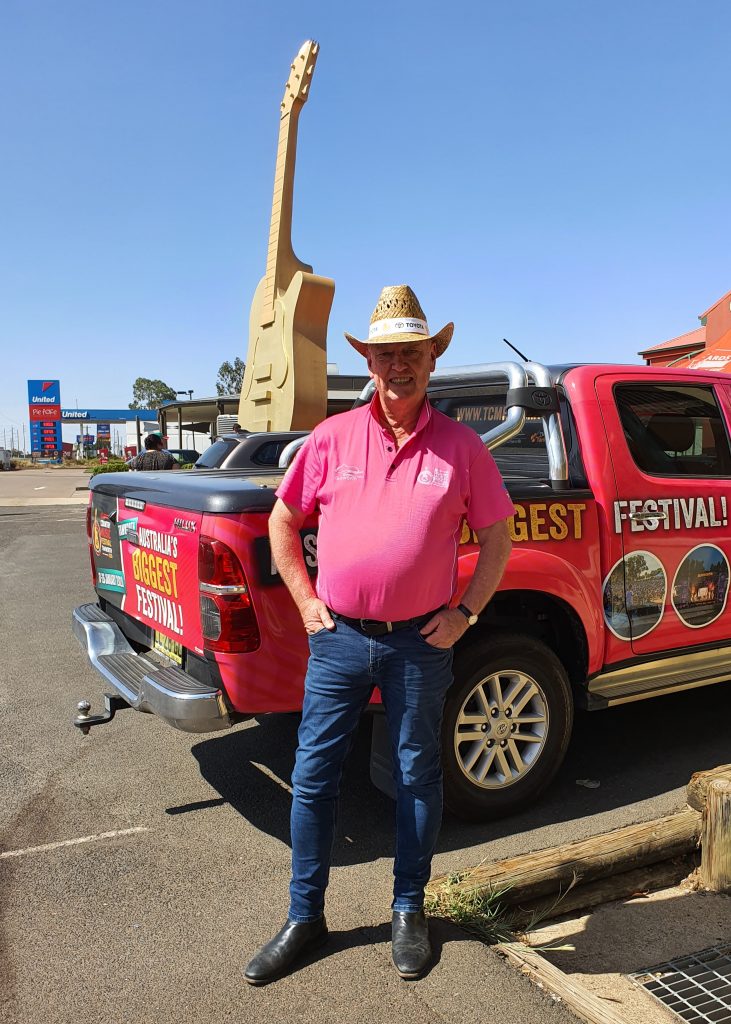 Hi Barry. I’m curious to know more of the background to the Golden Guitar Awards and the festival’s history. Would you please share some of that with us?

Yes of course. Well, Joy McKean won the first ever Golden Guitar award in 1973, for writing “Lights on the Hill”, which is a good ole trucker song performed by the late Slim Dusty. Joy, a successful musician in her own right, was married to Slim Dusty who is iconic in Australia as the father of Country Music. Since then several hundred of these Golden Guitars have been given out and this particular Golden Guitar structure was built back in 1985. It really has become the symbol of Tamworth and the symbol of Country Music, and Tamworth has become a guitar town. 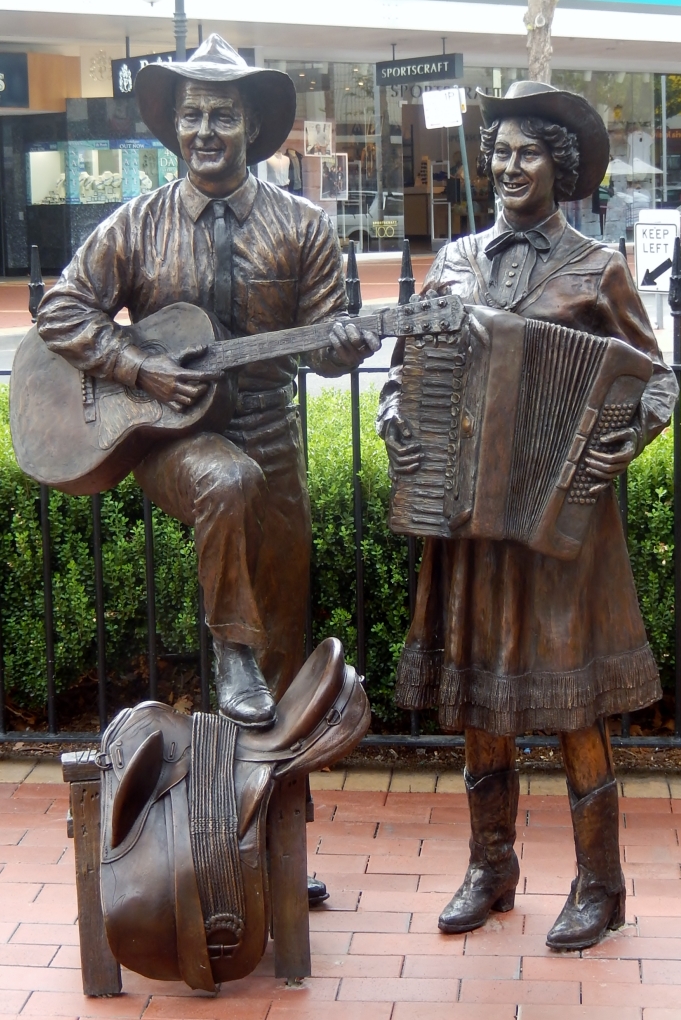 Behind the Golden Guitar we’ve got the Business Information Centre, and just recently we’ve opened what will be start of the National Guitar Museum. So that whole guitar theme has been carried all the way through. 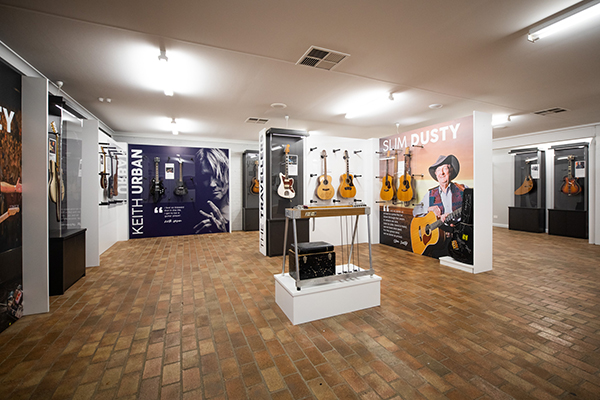 The festival in Tamworth has been going for 48 years. It started off being very, very small, and it developed, funnily enough, out of television coming to regional Australia, and that didn’t happen until the late sixties. And what happened with that is it decimated radio audiences in the evening, because where radio audiences used to have their peak time in the evenings, suddenly television took that away, and radio stations all over Australia turned to specialist programs because they didn’t have anything else to fill. One of the specialist programs coming out of Tamworth was a Country Music program called ‘Hoedown’. And what it did discover was that not everyone was watching TV, and that there was a bunch of people that were actually still listening to radio. They were truck drivers, they were miners, they were shift workers, they were farmers … which just happen to be akin to that Country Music spirit. And so very quickly there became evidence that there was this growing market in Australia of Country Music followers. So, the radio station of the day, and the executives of the radio station of the day said, “Hang on there’s an industry here we should capitalise on.” And so, in the late 60s they nominated Tamworth as being the Country Music Capital. And then that developed into the early 70s, when it was decided we should have an Award to bring everyone together to identify this industry of being Country Music, and Tamworth being the Country Music Capital.

So, in 1973 on January 25th, it was a Sunday, the Australia Day long weekend, the first Awards were held in the Tamworth Town Hall. There were about five events for that festival, and here we are, just slipped forward 48 years, and we’ve now got over 2,800 scheduled events across the 10 days in over 100 venues. We’ve got more than 700 artists engaged in the festival, plus another 300-400 buskers. So, it’s an extraordinary experience across the whole city. I guess one of the unique features of the festival is that this is really the only festival where the emerging talent has an opportunity to perform to a larger audience. And to coin a phrase, to make it in the industry in Australia, first you’ve got to make it in Tamworth. And it’s a bit like that in Nashville. Except we’re about 10 percent the size of Nashville. We’ve got about 60,000 people and they’ve got about 600,000 people, and so I guess everything’s multiplied. But still, in these ten days you know we swell, we double our size, we get something like 100,000 people on top of our own population across the ten days who just soak it up. It’s not similar to other festivals where you walk in and buy a ticket at the gate and you see 10 or 20 performances. This is across the whole city, with every nook and cranny filled with every flavour of Country music and more, and the talent here is just incredible.