Vintage Electric Guitars: Are they all they are cracked up to be? (by Dale Robbins)

What defines whether a guitar is collectible?
Is it the sentimentality of one of the classic designs from a bygone era that was used by great musicians of the past? Ie. Jimi Hendrix’s Fender, Jimmy Pages’ Les Paul…
Is it the superior sound that old guitars possess?
Is it because they aren’t “made that way” anymore?
Is it because they easier to play?

Down the biggest rabbit hole of all guitardom we go! …

And the answer is…. It’s a very subjective issue but Vintage guitars are, in general, not worth the money. 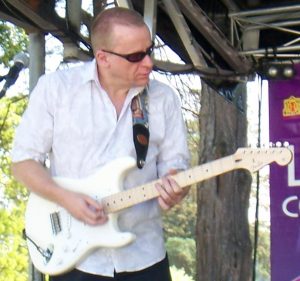 There is a universal truth, and that is the person “driving” any guitar has more influence over the music being produced, than the quality and design of any instrument. And we can see examples of this every day – it’s not the instrument but HOW the player uses it creates music.

If Vintage guitars truly possessed the “mystique” attributed to them they would be capable of converting beginners into legendary guitar players, instantly, and the entire argument would be an open and shut case. But the truth is that if you hand a teenage kid a coveted vintage L-Series Fender Stratocaster, do they become an instant legend? No…

Conversely if you hand an experienced player a cheap new guitar can they instantly make music with it? Yes!

There is somewhat of an argument that of all the “classic” designs that we humans construct e.g., cars, planes, buildings, bridges, etc… nothing is quite as “backward facing” as a classic electric guitar design.

Take the Fender Telecaster as an example – Not much has changed with the design over the last 71 years. The fundamental of the product have survived through thick and thin for a long time with only minor incremental changes year after year.

If we were to apply this same logic to say the market for modern cars the world would be a different place indeed. We would be driving similar designs to the original Holden FJ, that looked like the FJ Holden, and trying to collect cars that looked more like the old FJ Holdens than new.

So, despite the market’s desire for classic designs do new guitars play better? Well, yes….. In general terms, they do.

There have been many gradual refinements over the years in the designs that have made new guitars MUCH easier to play and sound better. Those changes include: Fretboard radius, larger frets, smaller necks, better pickups.. On and On the list goes!

So why does the guitar world favour and covet old guitars?

That answer has many facets to it but fundamentally it is a case of “fear of missing out” ramped up into gigantic proportions. The adage “they don’t make them like they used to” is true (they make them better for sure) but in reality, it is merely the fact that old guitars are just that – old!

The “collectability” and “sentimentality” of old instruments and the sheer fact that old guitars simply aren’t made anymore is the defining factor.

Let’s look at some examples:

The beaten-up brown Fender is a 1964 L-Series Stratocaster 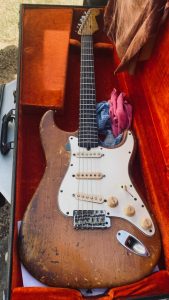 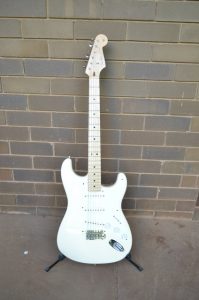 The brown guitar plays very well and sounds great. I have gigged it quite a few times and it is fine machine with plenty of what collectors would call “patina”, and “mojo” … Arguably this guitar in the right market is worth around say $20,000. It is 57 years old and hence very “vintage”. I like it…

The white guitar also sounds great and plays well. But it is a different type of “great”. This more modern guitar has active electronics (driven by an internal battery), a much comfier neck, and it’s easier to play… This instrument is not an inexpensive guitar but worth considerably less than the old brown one. I like it a whole lot more as it is easier to make music with.

The old cream coloured guitar in a 1978 Fender Telecaster Deluxe 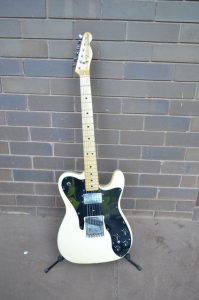 Is this comparing an apple to an orange? No… These two guitars have far more similarities than differences as they are both going for the “Fender” sound.

Hands down the new guitar, which looks anything but traditional in any sense of the word, absolutely sleighs the old one… Why?

Which is more “collectable”? The old Fender by a considerable margin!

So down the rabbit hole of this great debate we have gone and you have seen which side of the fence I am sitting on. Vintage Guitars are “nice” but they don’t consistency possess a “magic power” that justifies the exorbitant price tag!

Two examples aren’t enough to generalise the entire population of the millions of electric guitars, old and new, in this world, but generally just because it’s old doesn’t mean it’s good… or that it’s worth big bucks!

Dale Robbins
(Dale Robbins, based in Toowoomba, fronts the “Dale Robbins Band”, and has been a long-time BASEQ member and supporter)

Addendum by Barry B.

I’m not going to weigh into Dale’s arguments, I don’t feel qualified, and the general subject is also a point of discussion among drummers and keyboard players (Hammond B3 vs a Nord, anyone?).

But I will present a caveat, the “Unicons” or “They Don’t Make ’em Like That Anymore” instruments. An interesting point is they don’t make ’em anymore because they were terrible sellers (compared to the popular Telecasters, Strats, Les Pauls, Precision and Jazz basses) so are considered “minor collectibles” (like bottle tops or phone cards, perhaps? Family heirlooms of Dutch Masters paintings they ain’t) 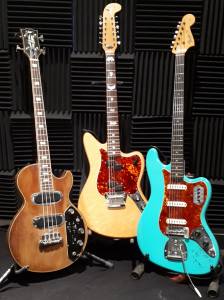 This photo shows three out of production instruments that have a very unique sound, and aren’t coming back.

Gibson Les Paul Recording Bass (1971) – a Les Paul experiment (guitars and basses) with low impedance pickups. With it’s walnut body and neck it weighs a ton, although it has sustain for days. I can see why it wasn’t popular with working musicians but I can also hear why it’s got the “Recording” model designation.

Fender Electric 12 (Electric XII – 1966) – very few electric 12 strings have been produced, there isn’t really a demand. Most guitarists know of the Rickenbacker 360/12, which has been a staple for bands like The Church. The Fender version differs in having a slim and easy to play neck, individual bridge saddles for each string (which the Rickenbacker, Gibson and Dan Electro 12’s compromise on with only six), and pickups that use the same idea as the Fender Precision (bass) to provide a humbucking effect on each pickup. The four pickup sounds (neck, bridge, both in series, both in parallel) give it a sound no other electric 12 string has. Fender Japan did make a Strat 12 string for a time, but they are just as hard to come by.

Fender VI (six string bass guitar, tuned E-e )(1962) – this short-scale bass guitar (lower than a baritone guitar) was a mad idea by Leo Fender back in 1961, triggered by the surf bands at the time and stayed in production until 1974, suffering poor sales. The slim neck on this specific instrument is both hard to play (string spacing – no wider than 1.5″ – same as a Jazz bass but with two extra strings) but also plays like butter with flat-wound strings thanks to the short-scale neck. This bass gives excellent results for recording when played cleanly. Yes, the Beatles used one (usually by Lennon when McCartney played piano, and once you know the sound you can identify it and Lennon’s sloppy playing), and The Church (again? There’s a trend here…) have added it to their stable, thanks to Kilbey and Ian Haug. The Made in Japan Fender reissue is terrible: while the pickups are stronger, it sounds too “bitey”, and the neck depth is noticeably thicker, making it even harder to play. I suspect the even more recent Squier version is worse, being a budget model. Both MiJ and Squier versions are no longer made, for the same reason the original was discontinued. Yes you can play chords with it, if you must. Yes it has a whammy bar, for unexplained reasons. By the way, it was a Dan Electro version of this idea that plays the solo in “Wichita Linesman”.

A final note, I have an Indonesian Fender Starcaster guitar (reissue), and while I am unable to compare it to the original, I am amazed at the good quality of such a cheap massed produced instrument. Once upon a time, cheap instruments felt every dollar they didn’t cost. While “there’s no substitute for quality”, mediocrity can be had on a budget.